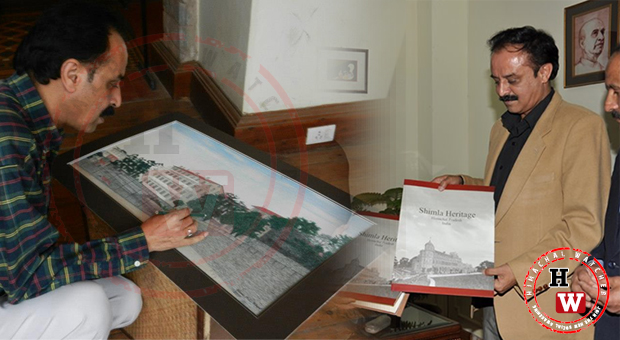 Shimla- Being born and brought up in Shimla, Cheenu wanted to pay his debt to this town by creating awareness among people about the historical background and leaving back sketches of building which with passage of time have changed its purpose in fifteen days long on going exhibition from May 16 to 31. More than 100 sketches permanently adorn the walls of gaiety theatre – space provided to him by LAC department.

It is often said that an artist is someone who produces things that people don’t need to have but that he – for some reason – thinks it would be a good idea to give them and following the same line Cheenu MJS (Mohinder Jeet Singh) Bhogal a local artist from Shimla, Himachal Pradesh, India, created numerous sketches of town’s heritage buildings along with sketches of State Animal Snow Leopard, State Bird Western Tragopan (Jujurana) (Tragopan melanocephalus) and other variety of flowers and wild animals.

Born talented and self taught artist, completed his schooling from St. Edwards School and after completion of his graduation from Sanjauli College, he joined his ansisterial construction business. “I was always interested in drawing since my early childhood and practiced construction business for a while but however, I always felt my purpose in life was different from what I was practicing and finally I decided to negate my identity as contractor and establish myself as an artist. Heritage buildings are my passion as I am always drawn towards; I am always fascinated by stone, wood and especial the chimneys in such old buildings”, said Cheenu when he was personally interviewed few years back. The artist used Coulour pencils, oil paints, acrylic, crayons to paint but however lead pencil sketching was his forte as by using 0.5, lead pencil, Cheenu gave birth to large number of creations including heritage buildings like Town Hall, Railway Board Building, Gorton Castle, Gaiety Theatre, Christ Church, State Library and last but not the least Advance Studies which are among few to name highly demanded sketches by the art lovers. Apart from Heritage Buildings he has also made sketches of almost 30- 40 temples like Hartkoti Temple, Baij Nath Temple, Laxminarayan Temple (Chamba), Bijli Mahadev (Kullu) to name few. A glimpse of his work can been seen on HP State’s Eco-Tourism Departmental calendar (2011) depicting 12 different forest rest houses in the state and one can easily tag his work as shadows; being so close to the original architectures.

However, the artist found it really hard to name any one particular sketch as his favorite as all were his creations but still he considered Golden Temple’s sketch to be his best creation; which definitely is a treat for an eye of the spectators; as he shared, “It is close to my heart as while sketching it, my inner voice compelled me to give up smoking and since that day I have never touched a cigarette again.”

Being 3D it stands tall among all the sketches of Golden Temple ever seen by him; especially in Himachal. It is one of its kind attempts and therefore it holds a special stature in his entire collection, as the artist said, “The original size of sketch is 54X 18 inches which is a rare attempt. It took me almost 300 working hours to complete the sketch. The sketch highlights every minute detail of the architecture which can be easily noticed.”

May that be, the original sketch of Advance Studies (Approximately 5 by 3 feet in size) displayed in the Gaiety Theater Shimla or any other sketch made by him, Golden Temple too has been made with a free hand without any external aid of scales. The artist claimed to have not even used eraser on his sketch as he said, “If I used eraser there was a possibility of damaging the minute details that have gone in sketching this master piece. If I am not satisfied with my creation instead of erasing it I remake it with a hope to make it better.” The sketch was unveiled by Himachal Pradesh’s Chief Minister, P.K. Dhumal, during the exhibition organized at Gaiety Theatre. So far the artist was able to organize three exhibitions – 2 at Shimla and 1 at Delhi. Currently there are more than 100 sketches and colour paintings made by him, adorning walls of Historic Gaiety Theatre Shimla; which has been allotted by the LAC department to him; and even few sketches can be seen in the state museum too, mesmerizing the spectators and most of the time making their jaws drop in surprise. However often a question is raised on his self taught talent producing almost perfect replica of original architecture to which he says, “One needs study my work in part rather than looking at the whole picture. An eye of an artist is required to trace the minute flaws which can be easily pointed out and if the tempering was done then anyone could have raised a question as my work is also available online
“For me my work is my worship and I do not compromise with it so I work till I get close enough to real architecture. It gives me a sense of possessing treasure and no one like to be robbed of it so how can I negotiation with its perfection”, concluded Cheenu.

Cheenu even left behind a pencil sketch folder sketched by him containing 10 sketches of Shimla’s Heritage Buildings for art as well as travelling lovers. The folder was inaugurated by Urmila Singh, Governor Himachal Pradesh.

Cheenu while speaking his heart out on the occasion that time said, “I am really glad that finally my Heritage folder has been launched as I have been working on it from quiet a long time. My main purpose of bringing up this folder was to make people aware about the history of the town. I think this folder can serve as a good souvenir for all the tourists that come from various parts of the world. It is my way of showing my gratitude to the town that has made me the person I am.”
Commenting on folder Urmila Sing said, “The efforts of Cheenu Bhogal is worth appreciation as the folder will prove to be beneficial for the tourists coming from different places as it will give them a glimpse of Shimla’s historical background. I sincerely hope more such type of informative literatures and booklets are published in near future that could serve as a guide by providing information on various tourists’ places in Himachal Pradesh for tourists. Currently in the ongoing exhibition is a tribute to Cheenu by the department of Language Art and Culture for his valuable contribution in the art field. Last year in month of September, he had planned to exhibit this show; but unfortunately his health failed him and so the show was cancelled; and had said, “The main purpose of this exhibition is to educate people about the history of Shimla, a town which once was British summer capital. Such sketches are not made within days; this exhibition has my five years of hard work being exhibited. I want that no one should miss this exhibition especially youngsters so that they may come to know that accept for Mall Road Shimla has many other fascinating location that they must explore.”

Before this exhibition Cheenu’s exhibition on Himalayan Birds and Pheasants, sponsored by Anand group took people’s breath away.
In this exhibition almost 240 art pieces; (on rotational basis); including of various heritage buildings including heritage temple Kali Bari and Jakhoo Temple; Thomas Cook Building; Christ Church; Railways station; Forest rest house and many other to name are exhibited. The show even has a huge frame of Raj Bhawan – Barnes Court back yard view, his last work. The coloured panorama view of Shimla is the highlight of the exhibition.

Till the time Cheenu was alive even though many people were tempted to buy his sketches but originals were always beyond their reach as he never sold them as he always said, “Originals are not for sale at any cost as two sketches of any building are never identical”; but now even his original work is available for sale. In this exhibition he answered the complaints of people for not painting in color as this time people can also see 10 sketches in pencil colour of heritage building including Tara Hall, Auckland House, B.C.S and his favorite St. Edwards along with Indian Institute of Advance Studies.

The exhibition has something or other than can fit in the pocket of everyone in forms of post card, poster, frames, heritage folder and original work.
While commenting on the exhibition Pratibha Singh, Chairperson, H.P. Red Cross Hospital Welfare Section and chief guest on the occasion said, “I find no words to comment as hard work done by Cheenu is extremely beautiful and shows how much he adored the historical buildings of Shimla. I knew him personally and cannot imagine that within such a short span he put in such a lot of time to create wonders. It pained my heart to learn that such a wonderful artist is no more amongst us.”

Bottoms Up Tequila”- An adult comedy staged at Gaiety