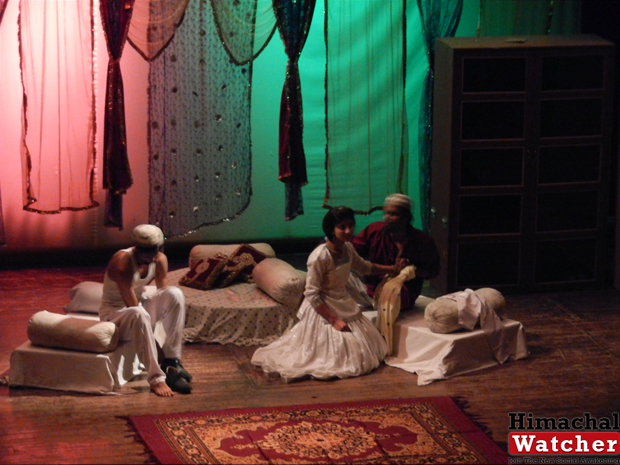 Something is better than nothing is the only positive hope we people can have when it comes to plays staged in Shimla.

People of Shimla got an opportunity to witness the magic of Saadat Hassan Manto in the form of a play – “Mukhoote” an adaptation of Karvat; staged by KBDS theater group Shimla at the historic Gaiety Theatre. The story of the play revolved around a prostitute Sundri, who comes to live in a locality and is, looked down upon by most of the people. Shekh Abdullah Khan, who is considered to be most virtuous man, invites her to dine with his family but she insults him feeling tormented by being accepted as normal human. Shekh was of opinion that he can make Sundri live a righteous life too. Finally when Sundri too starts to believe in the goodness of man but her trust shatters to ground when Shekh tries to molest her and is killed by his own daughter.

Considering the play to be an adaptation of famous work there was too much experiment done. The entire ending was changed as in original story Shekh continues to feed like a maggot on Sundri’s flesh to satisfy his need but here he was murdered by his own daughter. The reaction to this major change was mixed one as people who have read the original script felt it was challenging the intellect of great man whereas others felt it was a new message that needs to spread. There was no uniformity in language used, sometimes it was Hindi other time it was Urdu and considering the Muslim backdrop of the Shekh it was not apt.

Too much many scenes demanded set change and on first day the whiskey bottle that was stage property in the house of Sundri kept on dressing table was still seen on the same spot in the house of Shekh the so called pious man before the climax. There is a great need to focus on all small aspects too for making any production a success.

The dialogue delivery at many places was too flat without any emotions and the daughter coming on stage and stabbing her father was too sloppy and lousy. There was hardly any panting up of emotions that can lead anyone to murder and that too one’s own father. In the last after cast introduction, while thanking note, a foreign spectators where extended a special thanks by the comparer which definitely does not fit in, for natives are no fool to have given their valuable time and money.
No doubt the trend of paid shows is a welcome change but one should be careful that people do not feel robbed of their money. When one is being asked to pay their experience should be a memorable one.