Shimla: Politics is a science but not for Indian ideological groups. The political parties lay more emphasis on cheap sentimental tricks or false propaganda, especially through the social media. However, the right wing has taken the concept of opportunistic manipulations of facts to a new level.

They have sensed the weakness of the media to fall easily and quickly to sensational news. The media publish hurriedly and it creates a noise in which facts struggle to be seen or heard.

The most recent and quite an ugly example was presented at the Centre of Excellence, Government Degree College Sanjauli.

A video of a quarrel between students appeared on the social media claiming it took place between two student organizations, Student Federation of India (SFI) and Akhil Bhartiya Vidyarthi Parishad (ABVP) at the Sanjauli College. Within no time, it was on news websites. Some national Hindi dailies also covered it with the same claim.

By Thursday, ABVP claimed that some hostel students were allegedly attacked by students of left-wing ideology. By this statement, ABVP suggested that it was not involved in the clash directly but fought for the suspended students.

As a contrast to this statement, in the video, one student is seen being attacked by a group of about 20-25 students.

The video was not fake, and the brawl did take place inside the campus of the college.

Himachal Watcher had too published a report based on initial reports received from our sources including some media person. They also repeated more or less the same story. One of the dailies said the violence had broken out over the banner of a student organization, which was baseless.

ABVP even held a protest on Thursday to revoke the suspension of the students involved in the brawl. It alleged that some faculty members abused, slapped, kicked, and pushed them out of the office when they tried to reach the Principal to submit a memorandum against the one-sided action.

The ABVP, in its press statement issued on Thursday, called it an ‘aggressive protest’ that compelled the college administration to yield to its demand of revoking the suspension.

About 27 students took part in this ‘aggressive protest’, as shown in the picture below: 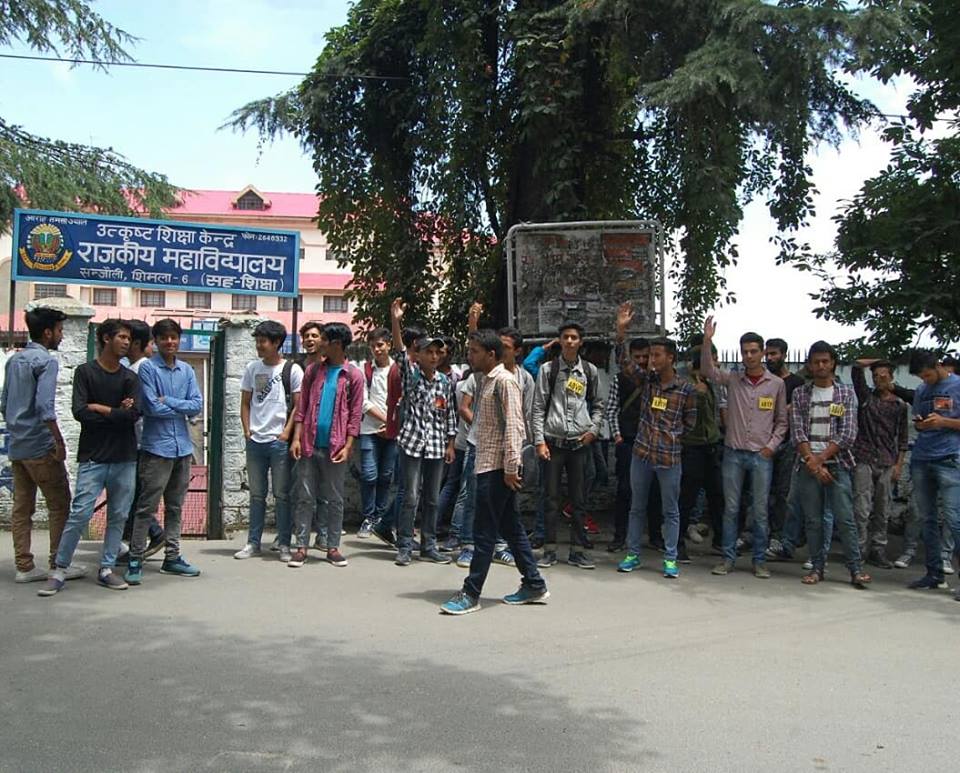 ABVP repeated the same allegations when HW reached its leaders. It said the college took one-sided action against some specific students while the left-wing supporters were spared.

The college revoked the suspension, which the ABVP termed as their victory.

After receiving critical comments from the readers and students, HW today talked to all concerned parties including the Principal, CB Mehta, Shimla Police, the injured student (red shirt), ABVP and SFI leaders.

Except for the ABVP, no one, not even the victim or eyewitnesses, told HW that it was a clash between ABVP and SFI or an assault by SFI on hostelers. The victim himself told HW that the incident had no relation to student politics or student organizations.
It turned out that this victim student who was attacked is a national level volleyball player, who has represented Himachal several times.

On July 31, I was sitting with my friends inside the campus when a group of students tried to assault one of the friends. I was not aware of the pre-existing grudges between these students but I intervened peacefully and tried to protect my friend,

However, I became the fresh target of the group, who thrashed me badly. I was punched and kicked repeatedly until I got back on my feet and retaliated,

I was left alone as my friends disappeared from the scene,

I am neither a goon nor do I belong to any student organization. I am mostly occupied by my daily basketball practice. But the video has casted a negetive impression not only on my senior players but anyone who saw it. The media too circulated the video with the pack of lies told to them.

The Principal, when asked about the matter, said,

The brawl was not associated with any of the organizations. Moreover, as the Principle, all of them were only students for me. However, some of the suspended students might have included those associated with ABVP. The protest and the allegations of the ABVP against the faculty members were most likely an effort to revoke the suspension of the students.

When asked about revoking the suspension of the students, he replied,

We did not revoke the suspension of the students due to a pressure from the organization or the protest but after speaking to their parents and receiving written apology regarding the violence,

As per the Police Station, Lakkar Bazaar, where the students were taken for questioning following the brawl, refuted the claim that the two parties decided to compromise. A complaint has been filed against the involved students, the police said.

HW also talked to SFI leaders, who termed it a false propaganda to defame student politics.

SFI has recently begun its protest over the demand of reviving direct elections to the Students Central Association, which were banned in 2014. Prior to the ban, the students always supported and elected SFI as their representative and ABVP had been facing defeat in the elections,

It is a deliberate manipulation to defame the student politics, thus, give a reason to prevent the revival of the direct elections to the SCA.

SFI also shared screenshots of a post shared by ABVP on its Facebook page with alleged false information blaming the violence as hooliganism created by SFI. 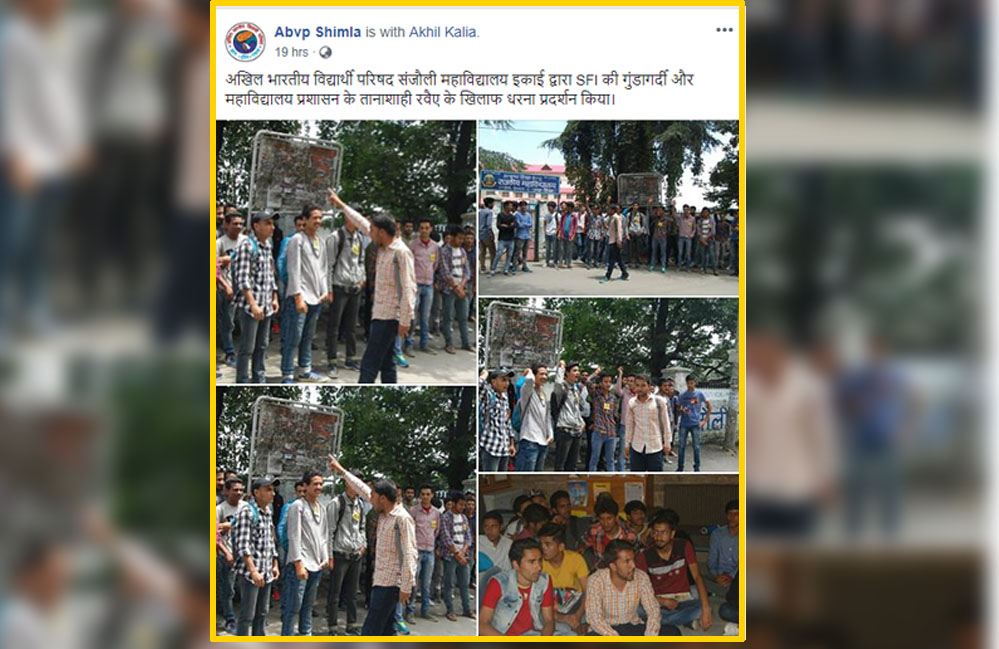 The worst hit of the alleged false propaganda is the victim student, and the media owes him an apology. As per the account given by him, he had just tried to protect his friend and was dragged into this brawl, which was given a political colour.

He was worried that his mother would be in great distress if she came across this video. This is why HW has refrained from mentioning the name of the victim.