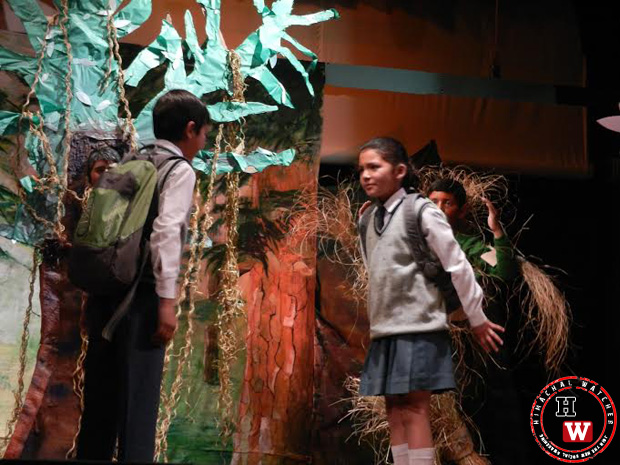 Samanvya, Theater group in association with Sangeet Natal Akademi, New Delhi presented a play Bargad; a Hindi play by the students of children theater workshop held at Kasumpati; the Historic Gaiety Theatre. The play was written by Krishan Lal Shridharani and directed by Chris.

While informing about the show Chris, director of the play informed, “Play was a result of an annual theater workshop which is always organized by the government for polishing the talent of young children. It was my first experinece directing young children, which I found quiet refreshing. When dealing with adult actors we can make their moment mechanical but here it was not possible and that was the beauty of it.” In workshop 30 students participated, from class first onwards. The play Bhargad allowed all 30 of them to showcase their talent on stage in front of audience. The play depicted story of tress and his relationship with mother nature and its other elements including wind, water, plants and school children; to name some. They all live in harmony with each other and through the play director depicted one day activity that is from dusk to dawn; Bargad is old and respected and loved by all. He is a wise council giving words of wisdom to all including plant and birds. One night there is a storm and unlike others he refuses to bend and surrender in front of him. The wicked storm uproots the tree and it dies. There was nothing extra oridnary about the story. The message was not clear but what can be said in nut shell is Bargad refused to bow in front of storm saying he only bend over to honor God and dies Whereas his character was potrayed to be that of a pure soul, still after his death Bhinda takes his place without much remorse. His goodness is forgotten and Bhinda’s remark that he should have listened to storm; emphasised that very few people are left who can die for their principles and often are considered to be fools by others rather than being respected.
The highlight of play was children and their performance as in this 3 week workshop they have actually got introduced to their new personalities. As such the story of play was simple without anything extraordinary but set designing and other fine details made it a cute treat to watch.