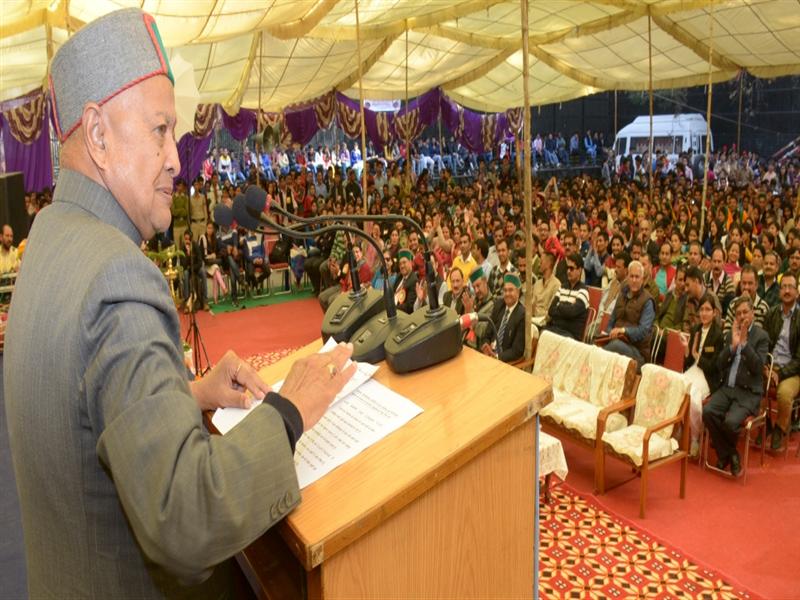 Chief Minister, Virbhadra Singh while presiding over the concluding ceremony of the three day mega HP University Inter-College Youth Festival-2014 at Government College, Sanjauli today announced construction of a hostel for the girl students of far-flung areas of the State. He also announced a sum of Rupees Four crore for a new block with parking facilities and the classes. He accorded permission for constructing over-bridge near the Sanjauli College connecting IGMC road with the National Highway.

He said all students of this college of ‘Centre of Excellence’ should definitely go beyond the sky heights in academics. “Sky should be the limit for them and they should not waste time indulging in undue politics”, he said, adding that more such colleges of excellence would be opened in times to come. He expressed happiness over the constitution of SCA of the Sanjauli College and said that similar procedure should also be adopted for electing office bearers in other colleges of the State as well. He had all praise for the SCA President Ms. Shaksharta.

Expressing concern of the growing incidents of violence in the HP University and in various educational institutions of the State, the Chief Minister said that such indiscipline would not be tolerated in the educational institutions of the State. He said that he was happy to learn that the Sanjauli College Students Central Association (SCA) was unanimously nominated. He said that many colleges in the State had been adopting the same pattern of nominating the SCA from amongst the meritorious students. He said that a committee headed by a retired Judge of the High Court had been constituted to look into the fee pattern and its report was awaited.

He said that the State Government had opened as many as 15 colleges in the far-flung and remote areas of the State during the present Government’s regime adding that the many new schools were also either opened or upgraded in the remote corners of the State facilitating the students, especially the girl child to pursue higher education at their doorstep. He appealed to the teachers to voluntarily serve in the colleges and schools in the far-flung and remote areas of the State so as to educate each and every child towards making a Himachal a strong and vibrant State. He exhorted the teaching fraternity to themselves opt for teaching in remote corners instead looking for postings in and around the cities.

Virbhadra Singh said State Government was making concerted efforts to provide technical and professional education to the students as these were the doors for opportunities for the youth in any developing Nation. Moreover, it will also ensure employment opportunities in various sectors including self-employment, added he. Expressing happiness that the Government Degree College Sanjauli has emerged as the ‘Centre of Excellence’ and had produced many luminaries who are bringing laurels to the State by serving as either high government functionaries, in defense services or were the successful entrepreneurs.

Such festivals should be encouraged so as to promote fraternity and to inculcate discipline amongst the youth, said the Chief Minister. He added that together with promotion and preservation of our traditional culture these festivals play an important role in inculcating the ethos and values.

The Chief Minister also distributed the prizes to the winners of the competition.

Earlier, Joginder Singh Negi, Principal Government College Sanjauli welcomed the Chief Minister and honoured him and the other dignitaries present on the occasion. He also detailed about the event and the other college activities, besides the academic excellence of the college. He said that as many as 750 students from 45 colleges participated in the Youth festival which began on 16th October, 2014. Besides, classical shows, folk dance and folk songs of the State remained attractions of the event, he said. He also demanded adequate space for constructing the ground for the students and a hostel for girls in or around the college.

A colourful cultural competition display was also organized by the students of different colleges.

Ms Shaksharta, President of the SCA proposed vote of thanks.

Government increase VAT from 25 to 27 percent