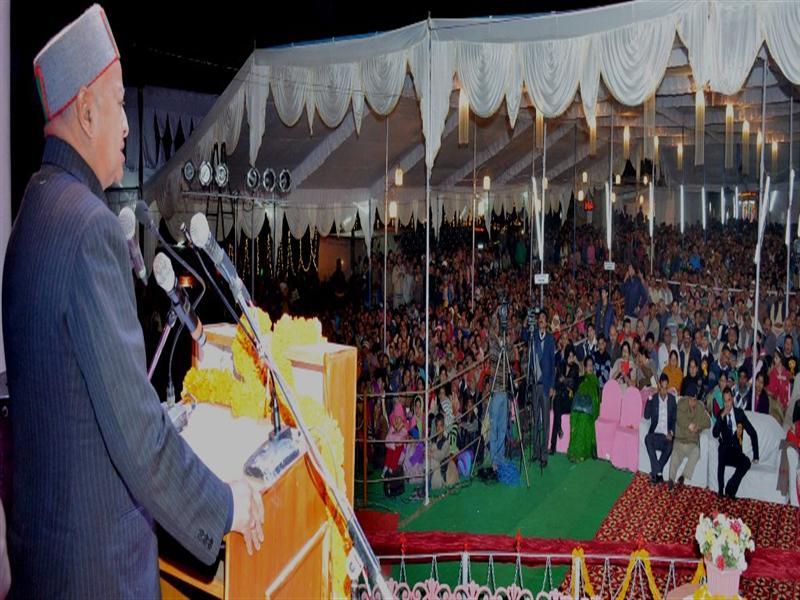 It was due to the efforts of the first Chief Minister of Himachal Pradesh late Dr. Y.S.Parmar that Himachal became the 18th State of Indian Union and we are indebted to him for his efforts for making the State progress leap and bounds said Chief Minister, Virbhadra Singh after inaugurating the cultural evening of International Renuka fair at Renuka in Sirmaur district on late Sunday evening.

Chief Minister said that Dr. Parmar was held in high esteem by the then congress leaders of the Country, and had strong association with them and the time when many small princely States were being integrated to form a united ‘Bharat’ under the leadership of first Prime Minister of India Pandit Jawahar Lal Nehru and Sardar Vallabhbhai Patel. At the very moment Dr. Parmar pleaded for making Himachal a separate entity though few people were opposing the same and were of the opinion of merging Himachal with Punjab, he said.

“It was a historic day that when the tricolor was being hoisted proudly on the Red Fort at Delhi on 15th August 1947 by Pandit Jawahar Lal Nehru, the whole country joined in celebrations of Independent India, which was due to the long struggle of the Congress, and Himachal got separate identity due to the consistent efforts of congress and the credit goes to Dr. Parmar, who was the real ‘Himachal Nirmata” said the Chief Minister, adding that the Congress was and will remain the real benefactor of the people of the State, said he. Since achieving statehood and undergoing initial struggle, Himachal today stands as one of the most developed State of the Country, said the Chief Minister.

Virbhadra Singh said that as of today many opportunists were cropping up in the political arena. They come, they watch and they go, he said adding that they have vested interests and work for themselves rather working for the people, he said. The Congress is a party of a common man and works for the welfare of its people and not like those who come in politics for their own selfish motive.

Chief Minister said that the coming generation needs to preserve the culture and customs of the State and backtracking the ‘Dev Sanskriti’, the State’s culture, its customs and language would be lethal.

Listing the developments in the Sirmaur, he said that the government preferred Indian Institute of Management (IIM) to be opened in Kolar in Sirmaur and there were only few IIM’s in the Country. The Government announced one medical college for the district Sirmaur besides two to be opened at Hamirpur and Chamba. He said that the Government had opened many health & educational

institutions in the district and development of Sirmaur was the priority of our Government, he said, adding that the people of Sirmaur were simple and hard-working enough and needs to be given their adequate of development.

Earlier, the Chief Minister was welcomed and honoured by the Chief Parliamentary Secretary, Vinay Kumar who thanked him for gracing the occasion and said that the developments made in Sirmaur district was due to successive congress governments and thanked the Chief Minister for sanctioning projects worth crores for the district. He also placed few demands of the area before the Chief Minister.

Chief Minister also released a souvenir on the occasion besides releasing a book titled ‘Shree Renuka Ji Teerath’ published by Shree Renuka Shrine Board. He also released a DVD of Daya Ram Sharma and Pandit Chandramani and a CD of Pahari Songs ‘Muzaara’ by Dinesh.

Notification issued for bye-elections in PRIs