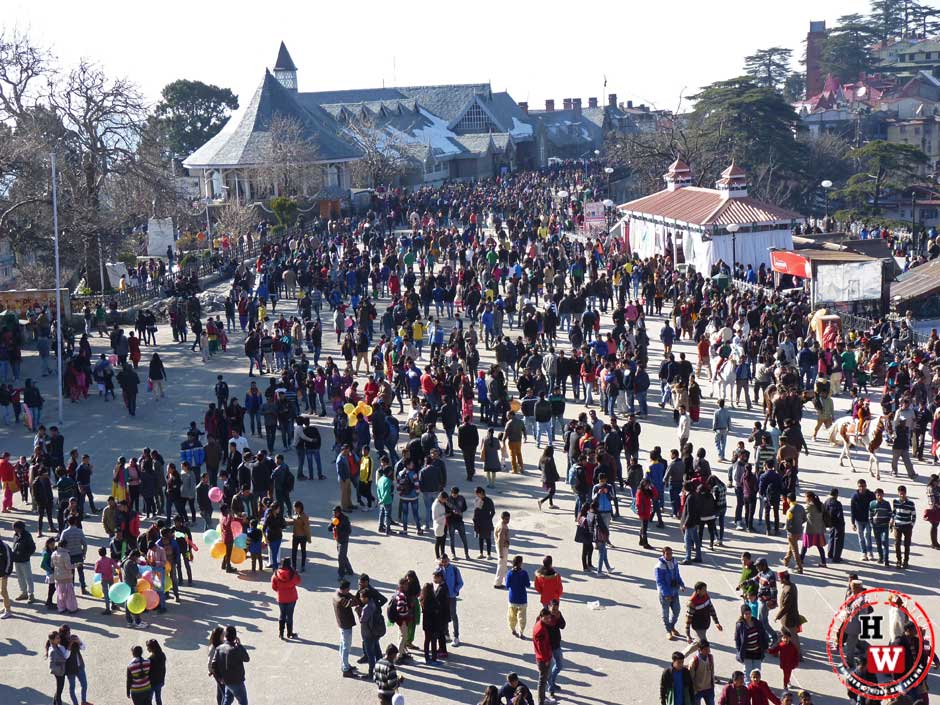 SHIMLA- So, tourists found no white Christmas in Shimla except some remains of previous snowfall in upper parts of Shimla like Kufari Narkanda etc. A sunny day mocked at Shimla ridge at the heart of the city. It was rather an odd day for the month of December. The mercury rose upto 10 degree during day, while nights are cold. There was not even the slightest hint at any chances that it gets white, and worse, Met Department predicts sunny, dry days on New Year as well.

However, that doesn’t mean the Shimla Ridge missed the crowd. Still, the day was a crowded one, and tourist did show up despite no snowfall.

One of HW members happen to spend some time on the Shimla Ridge and captured some photographs depicting activity of tourist crowd along with those who came to church to mark this year’s Christmas. We thought why not to share it with our readers and community members. Meanwhile, we can use some commentary in between photographs.

For hoteliers, they might have missed a jackpot, but definitely, still they are doing quite well.

Tomorrow, the newspapers are going to cry of Christmas Eve of 1991, when it snowed heavy in Shimla. Then, there were some lucky years that ended on white note like 1995, 2000 and 2002. Actually, it’s true that snowfall doubles the dose of celebration, especially on Christmas and New Year. Well, nobody is to be blamed but ourselves and poor governance of a Govt., completely corroded out of corruption. The climate change can’t be denied considering the shift in weather patterns. Nature did not do it, but mankind is forcing an ecological imbalance with mass axing of trees, vehicle air pollution, increasing piles of improperly disposed garbage.

It’s a bitter truth that Shimla did not prepare itself for rapid expansion of the city and increasing population. Trees are being axed illegally to aid private builders and businessmen.

Most likely, all of us are aware of recent massacre of 477 trees in Taradevi forests in Shimla. DLF luxury villa is almost at its completion, mocking at every green heart, Green Tribunal, and anyone who seek justice for illegal felling of trees which was manipulated to appear legal.

Then, our forest minister, Thakur Singh Bharmauri, is doing well to deplete forests in his home district Chamba along with other parts of the state. Of course, no one is going to get him to justice. It’s the subordinate, lower rank officials who would be sacrificed as scapegoats. We had written to Shimla Traffic Police regarding the increasing air pollution due to unmaintained buses and cars racing rampantly on Shimla roads. No doubt, they did very well to acknowledge the complaint but ignored any action. Our new SP, DW Negi, seems to be enjoying the weather of Shimla and privileges of his rank, carefree of any sense of duty. He found it more amusing and important to abuse and beat up protesting university students than worrying about deteriorating image of Shimla Police. We suggest, we should try to conserve what remains of Shimla. Some of it could be recovered if we could rectify our environmentally destructive practices, and if the Govt. officials and ministers stop behaving like pimps for property dealers and builders. Trust us, Govt. isn’t going to bother until the public is happy being a foolish slave. Shimla roads cursed with over-construction, complemented by our negligence