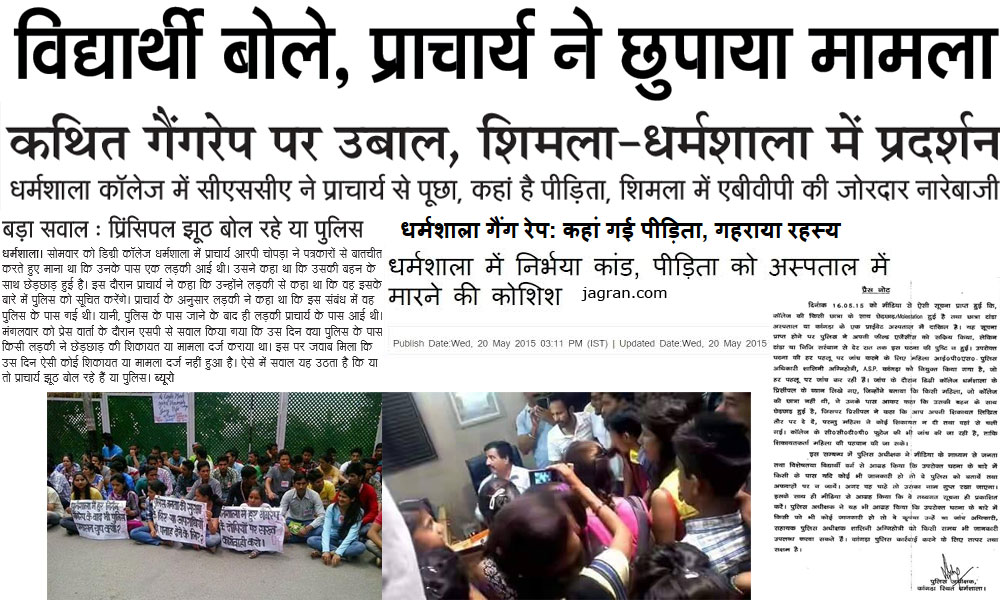 DHARAMSHALA – It’s been four days that the news of a case of alleged gangrape in Degree College Dharamshala is spreading to every part of Himachal through social media like Facebook and WhatsApp. The dailies aren’t sure about what’s going on. All that reputed newspapers could confirm is the news of regular protest from student organizations.

Presently, Dharmshala campus and the office of the SP, Kangra, Kapil Sharma, is under heavy security with policemen all around. The students alleged that when they had approached the SP, the gate of the office was closed, so they had to stage a protest outside his office. But the gate was opened a little later.

Also, report are coming that an FIR will filed by police along with constituting a SIT to investigate the case. The police has also announced a reward of Rs. 25, 000 for anyone who will provide relevant information regarding the case.

The SP Kangra has handed over the investigations to SSP Shalini Agnihotri, however, it’s still clueless about location and identifications of the victim. The SP has ensured that appropriate and unbiased investigation will be done. However, police claims that no family member and relative of the victim ever appeared to lodge a complaint.

According to a report in Tribune India, the SP, Kangra, Kapil Sharma, said

On the other hand protesting students alleged that the police department and the principal are trying to protect the culprits by hiding factual information. The principal confirms receiving a complaint of sexual harassment on Friday when the sister of the victim had approached him at his office. The principal claims that even the complainant did not verify the identification of the victim.

For everyone, the trickiest part of the allegation is a question; where did the victim and her sister disappeared and why no relative or family member has appeared to verify the allegations?

Secondly, what the hell police doing with CCTV footages from past four days? The police still claiming that it’s investigating the footage, but, we guess, it’s taking too long.

Posted by Himachal Watcher on Tuesday, 19 May 2015

The social media messages also alleged that culprits attempted to murder the victim at Tanda Medical College, where she was admitted in a very critical condition.

Himachal Watcher has also received these messages. Here is what is being circulated on social media and on some websites.\

Note: Himachal Watcher do not confirm any of these messages. It’s true that ABVP was the first to protest against the principal of the College alleging that he is trying to hush-up the factual information regarding the brutal gangrape with a first year college student. Now, SFI and NSUI have also begun staging protest in colleges. SFI staged a protest at Baijnath Degree College while ABVP again ‘Gheraoed’ the principal alleging that he had promised the students that the CCTV footage will be made available to them. However, the principal did not allowed them to view the footage, so they again ‘Gheraoed’ him.

The students also organized a protest rally in Dharamshala city and staged a protest outside the office of the SP, Kangra.

On the other hand, Amar Ujala confirms that the police claim that no such complaint was filed with them. No girl approached police station since the rumor of gangrape begin. While principal claims that when the sister of the victim had approached him with a complaint on Saturday, he had asked her to lodge a complaint with police too. However, the girl had replied that she had already been to police station but it did not filed a complaint as the culprits enjoy great political and financial influence.

Both or one of them, the police and the principal, is lying. If they aren’t lying, then there is no victim actually.

Meanwhile, police department has issues a press note requesting people not to fall for rumors on social media. Also, it requested people to come ahead with information and evidence if they have any. Here is complete press note: There are a few possibilities we can discuss here. One of them is that the gangrape did happen and the college authorities and the police and media are acting under the influence of high profile families of the culprits.

Second possibility hints that there is actually no victim because no one has come ahead to identify her. The girl, who claimed to be the sister of the victim, was not a student of the college. There must be someone who could, at least, identify a missing student in BA first year class. How tough is it? The college must have maintained records of all its students. There is a strong possibility that it can be rumor created for a purpose. The messages on social media appear to convey the same intensity as observed in case of ‘Nirbhaya’. May be, it’s intended to re-create a similar aggressive protest to disrupt law and order in the state.

However, at this point, it’s very hard to confirm validity of these messages being circulated on social media. So, please, try not to fall for them. We will keep you updated.