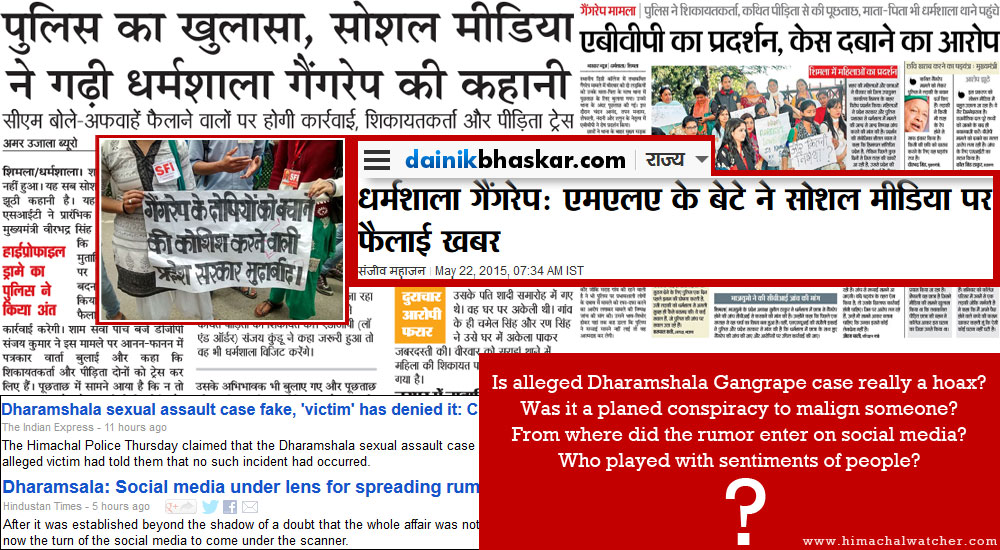 BJP leaders and ABVP demand a CBI probe as they expressed their doubt over the credibility of HP Police under the present Congress government. Many are calling it a cover up to hush up the matter and save the culprits. The investigations still continues to unfold motive behind the rumor.

DHARAMSHALA – The police claimed that the alleged case of brutal gangrape in the premises of Degree College Dharamshala is nothing more than a fictitious story that was circulated on social media, perhaps, with a motive of malign someone. Alleged victim had told them that no such incident had occurred.

With this news, people, who earlier has posted extremely emotional and provoking rumors, have started to delete it from their timeline. Similarly, many FB pages have either taken ‘U’ or have simply deleted their updates that had fueled these rumors. Political opportunists had begun making preparation to exploit this sensitive situation for their usual dramas for political gains. Many protest calls are being made to demand justice. VHP wants the culprits found as soon as possible and hang them immediately.

Meanwhile, news appeared on Dainik Bhaskar claiming that findings of the police investigation are hinting towards the involvement of the son of a Himachal MLA behind this conspiracy. The news further said that the suspected person circulated false messages on social media and also helped opposition (BJP) to fuel the issue to malign the image of Sudheer Sharma. Police has begun to investigate call details of ABVP leader Garvit Sharma to gather more details.

However here is what the HP Police claim as the findings of their investigation.

the girl, who had complained to Dharamshala Government Degree College principal that her “sister” had been sexually exploited on campus, was not related to the victim.

“The whole story of alleged sexual assault/molestation has turned out to be fake. No such incident has happened either in the college or elsewhere. The girl whom the complainant mentioned has told police that no such thing ever happened,” Director General of Police (DGP) Sanjay Kumar said here.

In Dharamshala, too, SP Kapil Sharma said the alleged victim and her parents recorded their statements, denying any such incident. Police said the case unravelled after the complainant was traced on Thursday. She had gone missing after meeting the college principal on May 16. She was allegedly spotted by a police guard near the police lines ground at 7:45 am and he alerted ASP Shalini Agnihotri, a member of the SIT probing the case.

The complainant was taken into custody and her parents were called. She allegedly failed to provide any authentic information about the incident except that she was asked by the alleged victim to complain to the principal about the sexual assault case.

Police then reached out to the student, who expressed shock at the report. Her parents endorsed her statement

The so-called victim informed the police that she had not even met the complainant, who claimed to be her sister. Both are from the same village near Dharamshala but the victim has not met her for the past four years

Reports of the alleged incident first appeared on social media. Police was initially clueless as nobody had lodged an official complaint. They had been looking for the complainant.

Both girls and their parents are under protective custody so that their statements can be recorded before the judicial magistrate under Section 164 of the CRPC.

Additional DGP (Law and Order ) Sanjay Kundu said the SIT will probe as to what led the girl to complain to the principal.

Some sources claim that the complainant has already told police that she was made to do so by someone with some vicious intention. We guess, we will have to wait for further details about the motive behind this scandal, if it is one. However, HW again request all social media users to be cautious about such rumors. Do not trust unverified information and media blindly. Such situation could lead to riots or violence, and may be, that was the idea behind this rumor.

This country is full of corrupt officials and politicians, but not every policemen and media person can be bought with money or threatened with power.