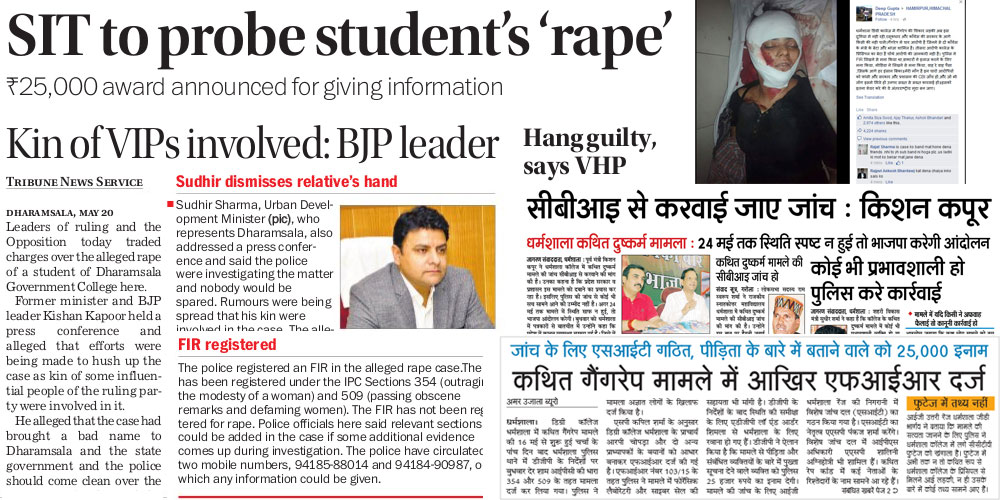 While rumors and unidentified information goes viral on social media, Special Investigation Team was formed, an the police lodge and FIR, and announces a reward of Rs. 25,000 for anyone who will provide relevant and useful information regarding the alleged culprits.

DHARAMSHALA – Amidst rumored allegations of gangrape at Degree College Dharmshala, not even a single piece of evidence has come into light. However, some people have shared a photograph on social media claiming it to be the dead body of the victim. The rumors also claimed that the girl died at the IGMC last night. Some social media messages claim that the girl was murdered.

However, we will request people not to believe on these messages blindly. Please, try to inquire about the source and validity of such pictures and messages. It’s a very sensitive issue and it has alarmed the police, the Govt. and media in Himachal.

Note: Himachal Watcher do not confirm the validity and authenticity of this picture being circulated on social media. Yesterday, an FIR was lodged against unknown people and the police department announced a reward of Rs. 25, 000 for anyone who will provide relevant and useful information regarding the culprits. A special investigation team (SIT) has been formed to investigate the case.

Also, the Urban Development minister and Dharamshal MLA Sudhir Sharma has come out against social media messages being circulated claiming his involvement in the case. Sudhir Sharma lodged a complaint at the Dharamshal police station and demanded strict action against those who are misleading people and defaming him.

As per a report by Hindustan Times, Sudhir Sharma said;

I want to clarify that neither is any of my relatives a student at the Dharamsala government college nor do I have a nephew, as is being claimed in the messages. I have only a niece who is studies in kindergarten. Even if my son is found involved in such a crime, I would not spare him. Police are putting in every possible effort to bring out the truth,” he said, adding that if the incident was true, the culprits would be taken to task. “On the other hand, if it turns out to be a rumour, tough action would be taken against the rumour-mongers, as they had tarnished the image of the town.

In another report, same source reported that the alleged gangrape case has taken political colors. The BJP has opened front against the HP Govt. alleging involvement of relatives of some politicians in the crime.
The report said:

Former BJP minister Kishan Kapoor, while addressing the media, accused the state government, police and college authorities of hushing up the sensitive issue. “It is very unfortunate if something like this has happened in Dharamsala,” the BJP leader said, adding that the incident was in total contrast to the statement of state director general of police (DGP) that crime against women in Himachal had come down.

Other than this, AAP and VHP has also joined the front open by BJP. Both demanded quick action against the unknown culprits along with locating the victim and her sister. BJP has warned to launch a protest if the government fails to clarify the situation until May 24.

However, Transport minister GS Bali came in support of the Govt. and commented:

Such news appearing in the media are tarnishing the image of the state. Whosoever is involved in the crime should be taken to task.

The Chief Minster, Virbhadra Singh also claimed these allegations as rumors intended to tarnish the image of the Govt.

Meanwhile, DGP, Himachal Police, Sanay Kumar told media that the police department isn’t acting under any pressure at all. Also, ADGP himself has decided to visit Dharamshala on Thursday to observe the investigation being made in this case.

Unfortunately, police expressed their inability to identify the victim or her sister in the available CCTV footage. The police has requested people, witnesses, anyone with some solid evidence and information to come ahead or contact on two cellphone numbers; 94185-88014 and 94184-90987.

Some social media pages and WhatsApp messages are even inviting people to gather at the police ground in Dharmshala to stage a protest and to demand justice for the victim, who is nowhere to be found until now.

The social media messages first claimed that the girl was admitted at the Tanda Medical College in a very critical condition and that the culprits had tried to murder the victim in the hospital. The new rumors and unidentified messages are now claiming that the girl died at IGMC Shimla.

Hindi dailies are making most out of this situations. In their online editions, misleading tiles are fetching good traffic for these mainstream newspapers.

A video shared by Amar Ujala claims that a friend of the victim has come ahead to verify the case. In this video, a girl is repeating the same old story as being circulated on social media.

From responses of social media users, it’s clear that people actually believe these allegations to be true. People have begun to scold and criticize the police and the government for intentionally protecting the culprits.

But, Himachal Watcher will request people not to fall for unverified images and information sources making serious allegations on such a sensitive issue. If these are rumors, then we are witnessing misuse of social media to create chaos. If the allegations are true, even then Himachal will walk into chaos.