SHIMLA- Last night Himachal Pradesh University campus witnessed bloodshed. Near about 11 PM, as reported by various sources, three students were attacked by a group seven people with sharp weapons. One of the students was severely injured.

A tribal student from Kinnaur, Jeet Singh Negi, sustained severe injuries on his shoulder and arm. A lot of blood can be seen split at Summerhill Chowk. Injured student was admitted at IGMC, Shimla. 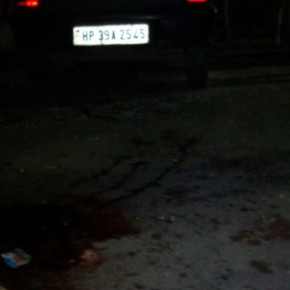 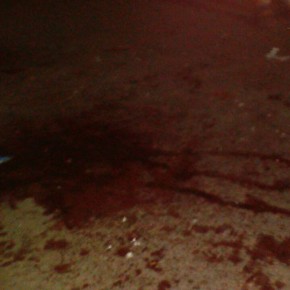 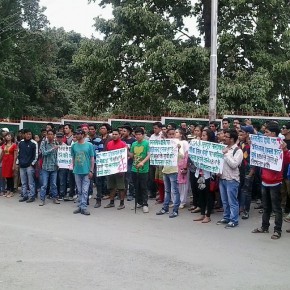 The Tribal Student Association alleged that earlier the ABVP had been trying to bully tribal students of Shaheed Bhagat Singh hostel. The students also alleged that culprits have been creating nuisance in hostels after drinking.

Police has registered FIR in a attempt to murder case, however, no one is arrested so far. The police FIR said,

Sh. Prabhu Negi alongwith Yudhishtra & Jeeta Singh Negi were going to Lahaul function from hostel. When they reached at Summer Hill Chowk, Seven persons namely Pradeep, Mandeep, Naresh Dashta, Sunny Banyal, Amit Kumar, Kushal Kaundal & Vikrant came out from vehicle No HP-39A-2545 and attacked on them with sharp weapons with the intention to kill them.

The Association also alleged that ABVP goons enjoy patronage of hostel warden Chaman Lal Banga. The warden did not take action even after repeated complaints of bullying and ransacking of hostels by drunken ABVP students.

On the other hand, HPU unit of Student Federation of India alleged that these students were going to attend annul Lahual-Spiti event when a planned assault was launched by ABVP members.

At the same time, NSUI has found it another opportunity to invite more police security at campus. NSUI preferred to call it bloodshed in a mutual clash between ABVP and SFI. This statement goes against allegation made by tribal students and SFI that two students were assaulted by a group.

However,  ABVP alleged that the victim is not a student of HP University and that he was drunk. As a contrast to allegations made by Association, ABVP alleged that it was other way round and it was Jeeta Singh Negi who attacked ABVP students and smashed their car.

Amar Ujala is very sure with this point of view shared by NSUI. Amar Ujala claimed that many students clashed with sharp weapons at Summerhill Chowk and many of them sustained injuries. However, there is no response from ABVP in reply to these allegations. We aren’t sure why is so? The campus atmosphere is tense after this bloodshed. The Tribal Student Association and other students staged a protest at campus asking for a quick action against culprits.

While, most of the people have begun criticizing student politics at educational institutes, the actual reason isn’t clearly known yet.

Violence should be the last method to solve any conflict, but sometimes, it’s necessary for defense, for survival.

Meanwhile, student organizations defend political activity as their right for they belong to the sect of educated youth of Himachal. Somehow, it does make sense. After all, illiterate and visionless politicians can qualify for high-ranked positions in legislature and official ranks but youth with higher education is criticized when practices politics. People forget that politics is taught at colleges and universities as subject – political science. However, practicing it practically is prohibited. That doesn’t make sense.

Someone must stand against corruption in administration, which, indeed, is a truth. Student organizations have exposed many scandals and corrupt activities like issuing fake mark-sheets, back-door entry to some students, and various other grievances. Complete absence of student unions will only encourage corruption.

HPU authority has already put ban on SCA elections and had deployed massive police force for many months after regular student protests against massive fee hikes and lack of basic facilities. The administration, headed by the Vice Chancellor ADN Bajpai, has proved to be the most incompetent as compared to previous records. Perhaps, poor implementation of RUSA is his biggest achievement. Not just students, but employees and teachers have also opposed it.