BILASPUR- Last year in August, taking serious note of pathetic condition of government schools in the state, the High Court of Allahabad had ordered UP officials and politicians to send their kids to government primary schools. No doubt, Himachals needs to strictly implement it too. The picture posted above depicts reality of what government of Himachal Pradesh has provided to its people on the name of school education institutes since the formation of the State.

As per the complainant, Dolan government middle school in district Bilaspur, is allegedly serving mid-day meals on pieces of paper. Surprisingly, a local resident, Jagdev Sharma, on his retirement, had donated 150 plates to the school specially for serving mid-day meal to children, but all of them disappeared. Secondly, the students haven’t been provided with ‘Taat-Patti’– the trademark of Indian government schools. The children have their meals on pieces of paper, sitting on dusty floor, which highly unhygienic. As per the complainant, the number of plates was more than enough to serve all students considering the strength of the school.

So, where are these plates? Did the headmaster distribute it to teachers, his relatives, and kept remaining for himself or sold the plates back in market, or something similar to that? 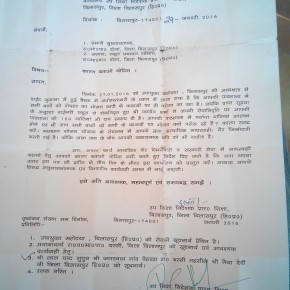 The complainant had reported the same to the Deputy Director of the Elementary Education Department. On January 7, 2016, the Dy. Director had issued a show cause notice to the headmaster incharge of the school for such a insensitive carelessness, asking him to submit a reply within three days. The headmaster was warned that in case of failure of doing so, a disciplinary action will be taken against him.

A month has passed, but no action was initiated against the erring person in reality, and the show cause notice and the warning disappeared in the pile of official files and papers. So, the complainant turned to media to highlight the issue.

Apparently, both the school staff and the Department are apathetic toward children’s health and showed no hesitation in depriving them of the facilities which are their right and are promised by government every five years. Despite written complaint, same business continues and the Department, too, has forgotten it because there is nothing new in it. Government schools has always and are mostly in poor condition.

So, in nutshell, the Elementary Education Department staff didn’t spare even the donated plates.

It appears that our society has lost respect to the moral and the ethical values with no or little sense of guilt for corrupt practices they follow. On any level of governance, corruption is omnipresent.

But, for those who can’t afford private schools, especially in villages, the children have no option but to depend on what government spares for them, which is not much.

The issue was raised by a local resident and Ashok Thakur, member of the State Democratic Youth Federation of India (DYFI).