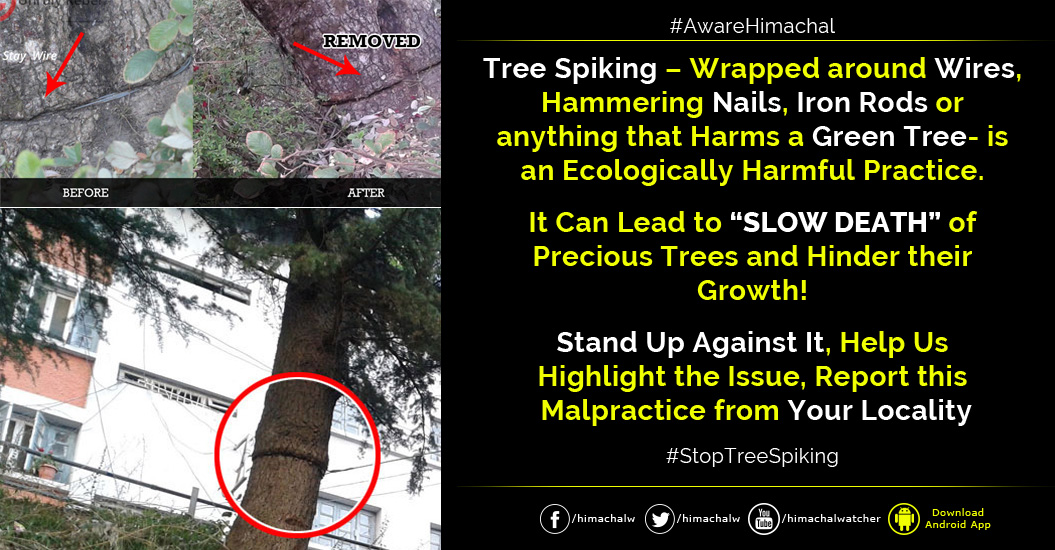 SHIMLA-What makes Himachal special on world map? Its ecological prosperity, diversity, and the Himalayan landscapes covered with greenery that attracts tourists, travelers, and adventure sport lovers from all over the world. The capital Shimla, once imperial summer capital, used to be the crown of Himachal, and is still one of the most visited hill stations. But neither its people nor the government ever made serious efforts to preserve it ecological treasure. 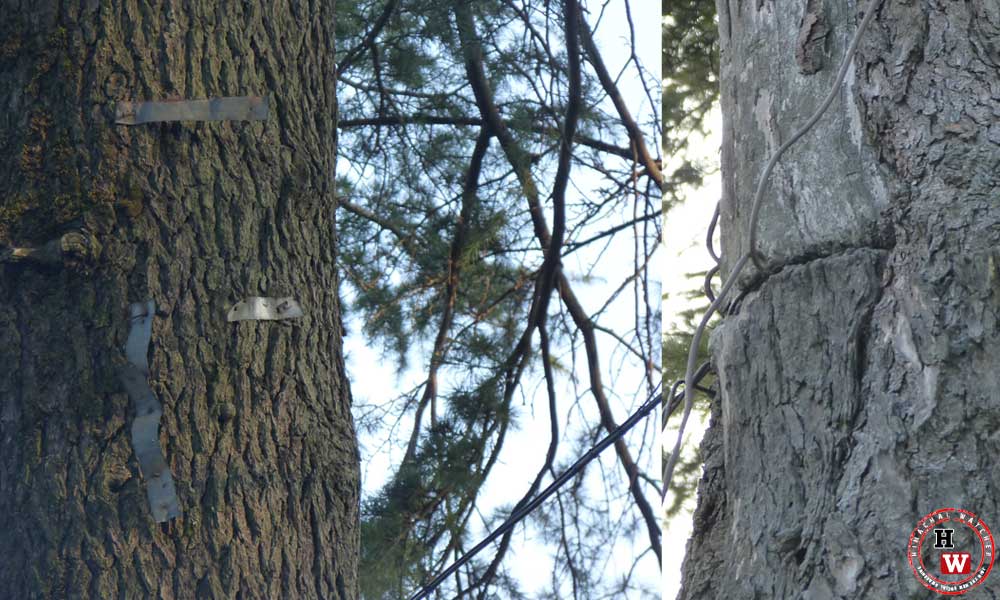 Tree spiking – practice of wrapping around metal wires, hammering iron rod and nails into trees- is one of the most harmful practices against trees in Shimla and most of Himachal’s urban areas.

An HW Community member has shared fresh pictures of some trees near Charabra, Shimla, showing metal wires wrapped around tree trunk. Some others were stabbed with nails. None of it was serving any purpose. It again revived memories of our earlier efforts to get these trees rid of unwanted, harmful wires and nails. 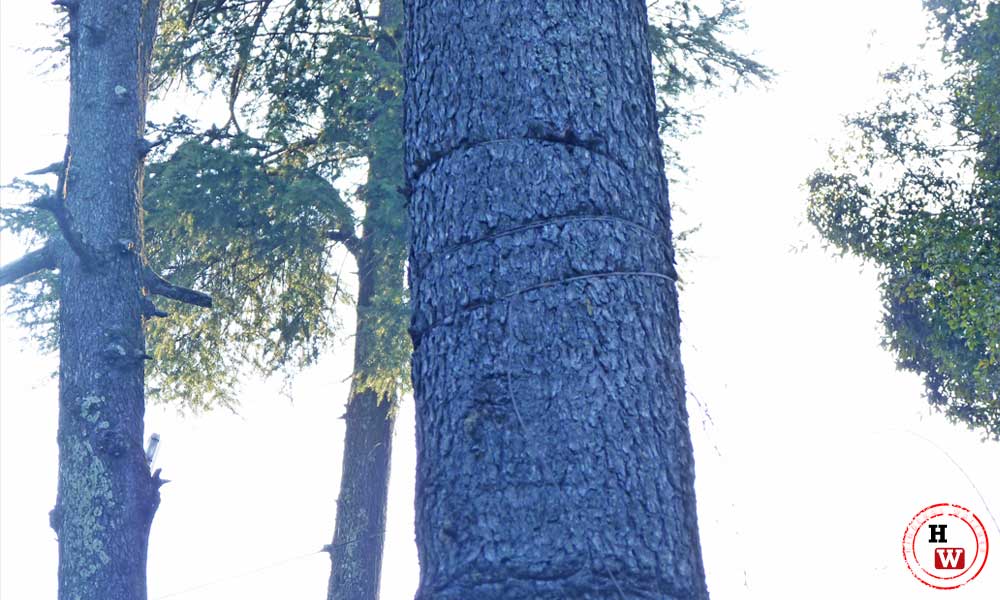 In 2011 and 2012, Himchal Watcher had brought the issue to the notice of the Himachal Pradesh Forest Department and Shimla Municipal Corporation. We had sent pictures to SMC asking them to take action against those who are using trees to hammer their banners/hoardings.

Himachal Pradesh Electricity Board was leading offenders with its metal stay-wires wrapped around full grown trees. A huge number of trees, especially in Shimla town, are inflicted with this bad practice. On our repeated complaints, many of these wires were removed. 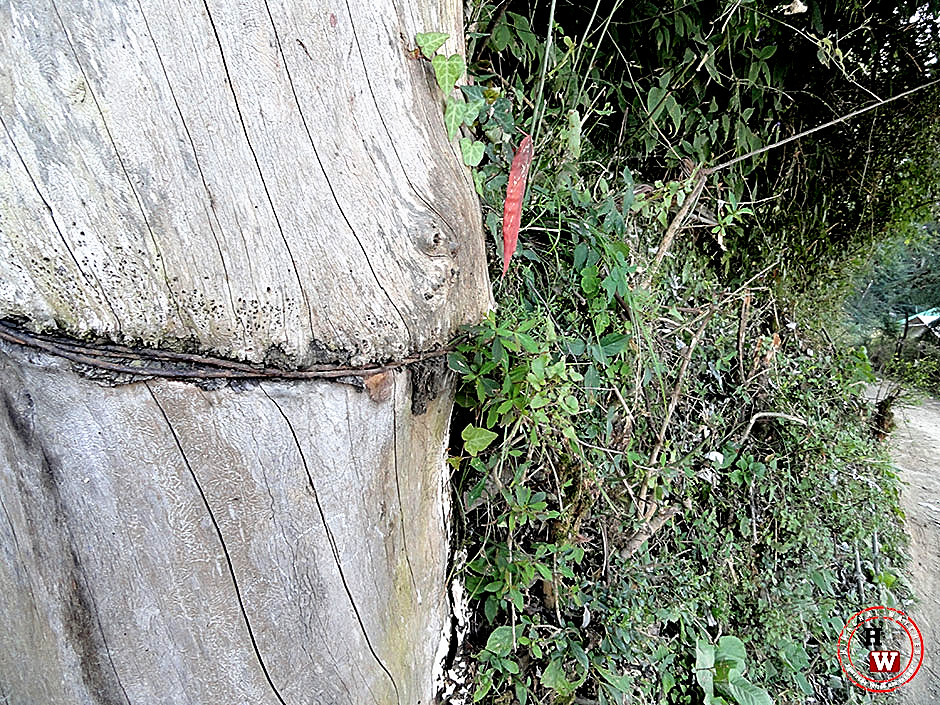 We had real tough time with thick-skinned government officials. It’s a hell of task to make them act, to actually make them commit to their job they have been entrusted upon. Initially, we believed the administration didn’t have this matter in its attention, and that after our complaints to save trees in Shimla, officials will wake up. Sadly, the departments stopped removing unwanted wires and nails as soon as our focus shifted to other issues. Now, in 2016, we are again writing to administration and to the people as a reminder toward their duty to protect every tree because its precious. 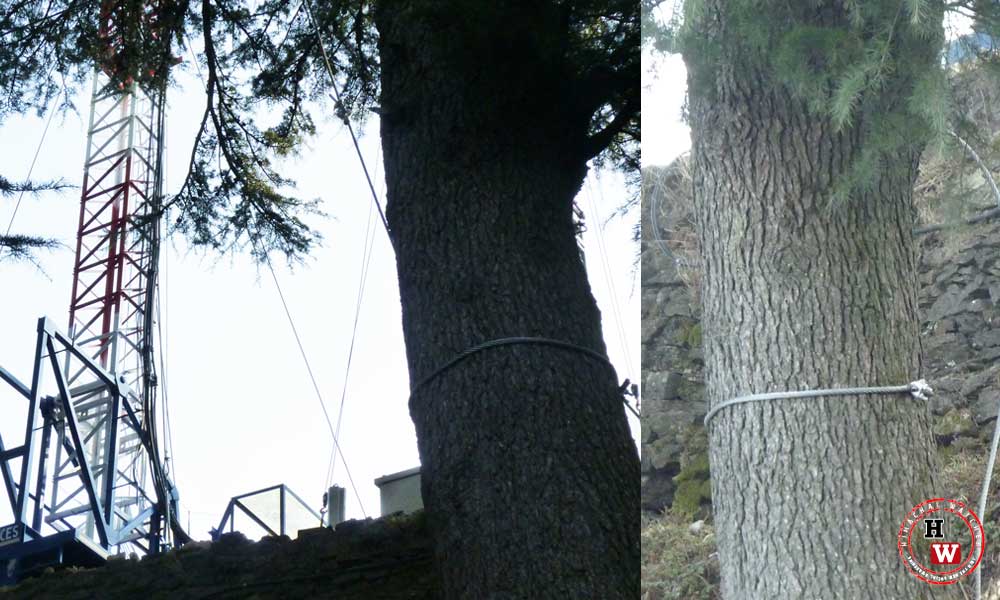 People are less aware that this practice damages tree trunks. The metal wires wrapped around trees keep penetrating deeper into the trunk because with the passage of time, tree-trunk diameter increases but that of the wire remains constant. The nails and iron rods can leave tree-trunk vulnerable to parasitic infections, just like human skin. At some stage, these wires/nails are completely overlapped by tree-trunk layers. At that stage, it’s almost impossible to notice or remove them.

In long term, these factors do influence tree growth and caste ill effects on its anatomy – a critical environmental issue that does count.

What’s more saddening is that it’s a very common practice for people in towns of Himachal to use trees as another object. Along with growing man-animal conflict, man-tree conflict is also on rise in ever expending urbanized culture. 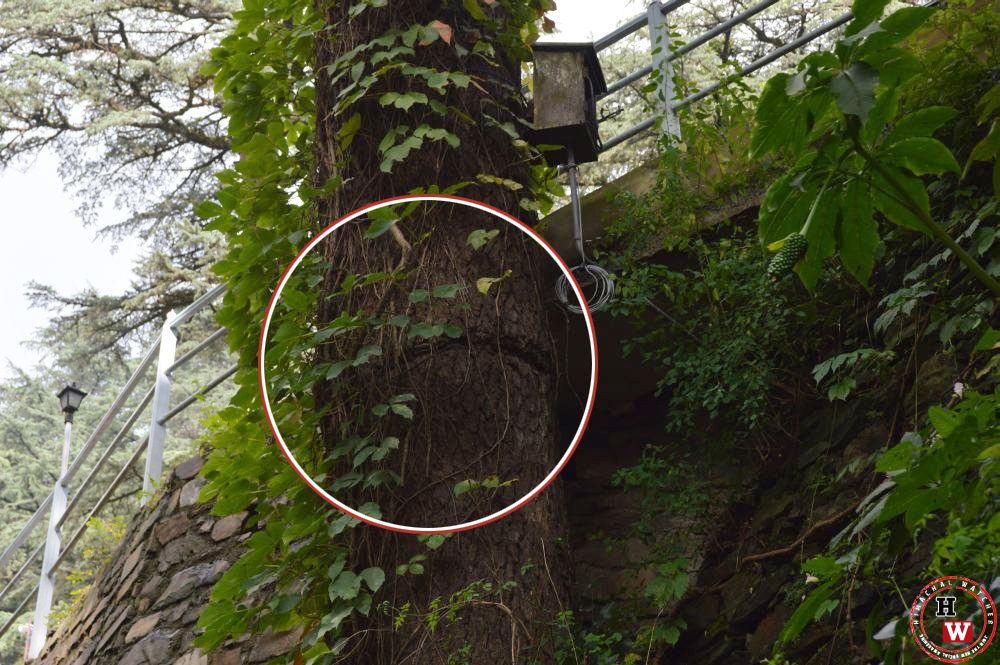 A great share goes to Himachal’s extremely lethargic and vision-less bureaucracy under the command equally worthless ministers and various boards. None of them never bothered to create awareness among people or discourage this malpractice. Can you believe that most of Himachal’s boards had not even utilized 50% of the funds allotted to them for the financial year 2014-15 until March 2016. Fearing lapse of funds, the boards spent the funds in haste to show utilization. So, the government department did have money, but they just didn’t bothered to utilize them on any sort of constructive policy including water schemes. 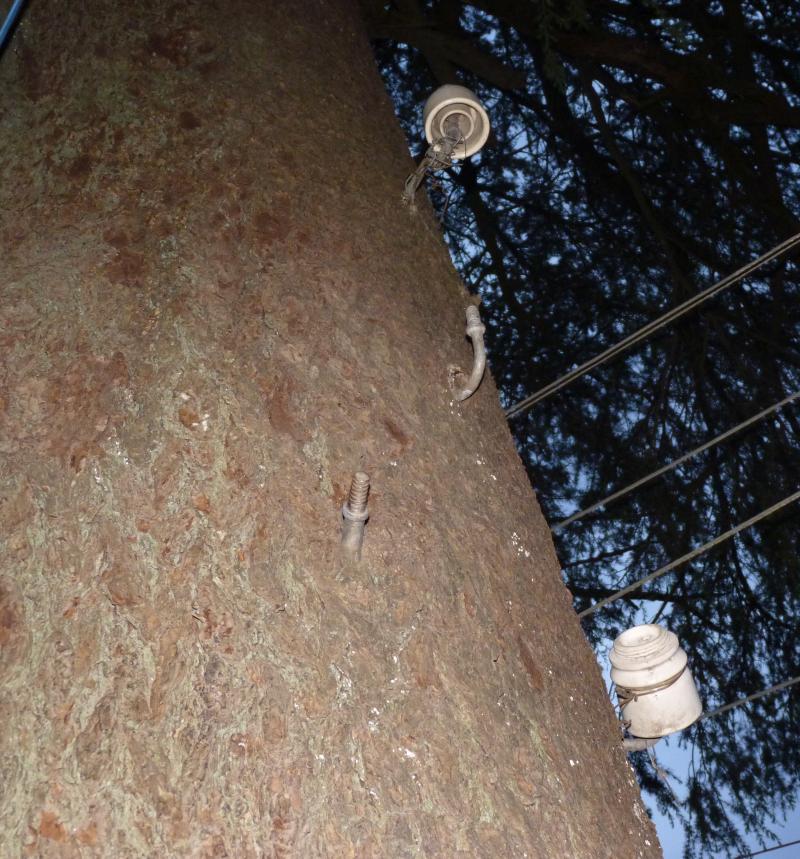 Controller Auditor General’s (CAG) report made shocking revelations about Himachal Pradesh Government’s absurd and embarrassing deeds, like taking loan to payback the interest on previous loans and that Himachal is under a gigantic debt of over Rs. 38,000 crore because of blatant corruption and poor utilization of loans government had been receiving for development projects. The ministers hiked their salary twice in two years, hiked their pension, and extracting money from the pocket of public for their luxuries. 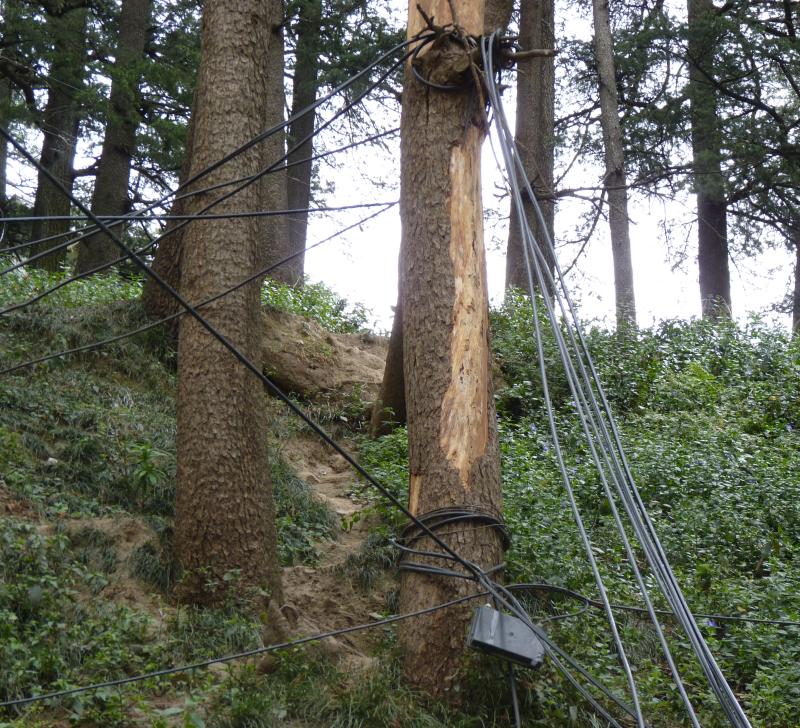 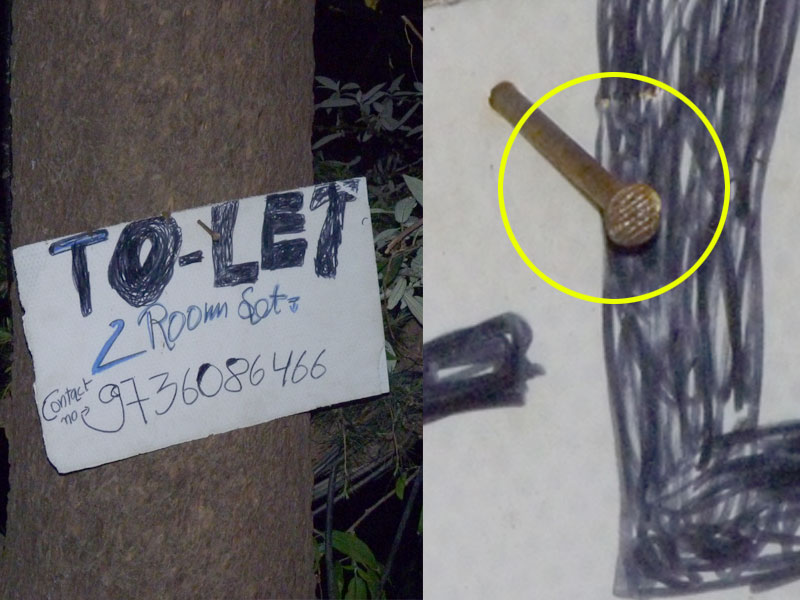 Weather in Himachal Likely to Change This Week, Yellow Alert from 24-26 Feb With Prediction of Rain, Snow