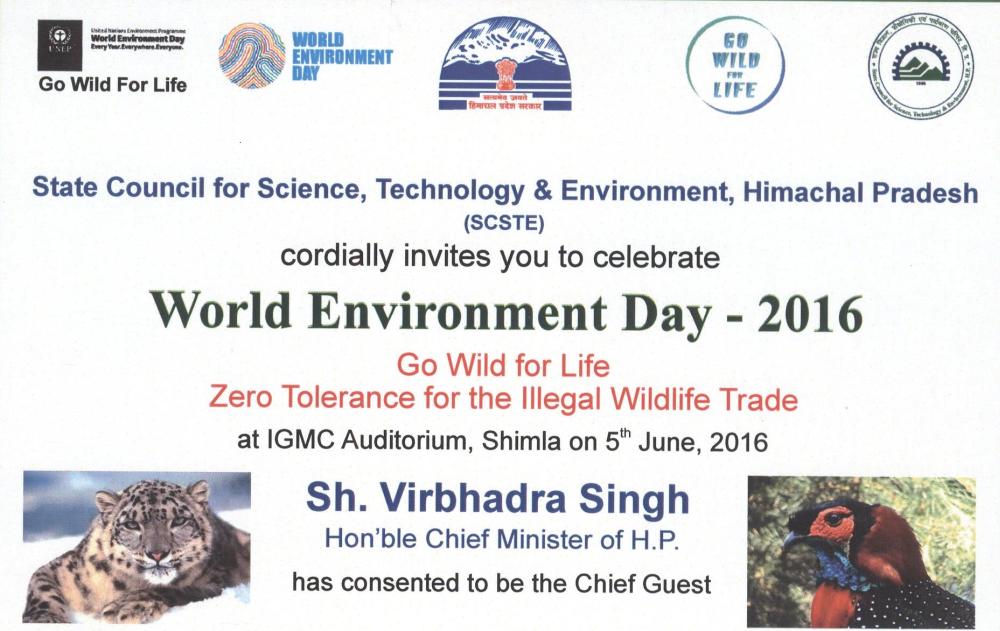 Monal is hunted for its beautiful crest and Western Tragopan, Jungle fowl and Khalij pheasant are poached for meat. Therefore, adoption of zero tolerance for illegal Wildlife trade is the need of the hour to preserve our biodiversity for future generations.

Chief Minister of Himachal Pradesh will be the Chief Guest on the eve of the World Environment Day. A rally of around 700 students from about 40 schools will start from five locations of Shimla town namely Chhota Shimla, Panchayat Bhawan, Auckland House, Sanjauli and Chaura Maidan at 8.00 am on 5th June, 2016 and will culminate at IGMC Auditorium, Shimla.

The State Council will organise various competitions namely Best Clean and Green School (Govt. and Private Schools), Painting/Poster (Junior & Senior Category), Greeting Card, Best Eco-club etc. The best turn out rally competition will be evaluated by the Judges on the spot. Besides this, skits on illegal wildlife trade by two local schools of Shimla town will be performed at the venue.

Exhibition of Poster/Painting, Greeting Cards competitions of students of local schools of Shimla town and nearby surrounding schools will be displayed at the premises of auditorium, IGMC, Shimla. The Chief Guest will give away the prizes to the winners of the various competitions at the closing session.

The booming illegal trade in wildlife products is eroding Earth’s precious biodiversity, robbing us of our natural heritage and pushing many species towards extinction. Over the years, illegal wildlife trade has emerged as a form of Organised Transnational Crime that has threatened the existence of many wild species across the globe.

In Himachal Pradesh, increased developmental activities have had far reaching effects on wildlife. Heavy snowfall and landslides during winters and Monsoon make most of the region inaccessible. Poachers take advantage of the situation when they go for the killing of bear, snow leopard, deer and birds. Claws, bile and skin from bear, claws and skin from common leopard and snow leopard and musk pod from deer are obtained for illegal trade.

Monal is hunted for its beautiful crest and Western Tragopan, Jungle fowl and Khalij pheasant are poached for meat. Therefore, adoption of zero tolerance for illegal Wildlife trade is the need of the hour to preserve our biodiversity for future generations.