SHIMLA- Despite strict directions passed to mining department and Director General of Himachal Pradesh Police, mining mafia is fearlessly quarrying construction material in capital Shimla. Illegal mining and dumping at Barmu and Kelti is not visible since Himachal Watcher published a story based on complaint sent by a local. However, mining mafia in Shimla like rest of Himachal appears to have lost fear of law.

Illegal dumping of mining waste on National and State Highways has become a joke that mocks at the face of law and justice. 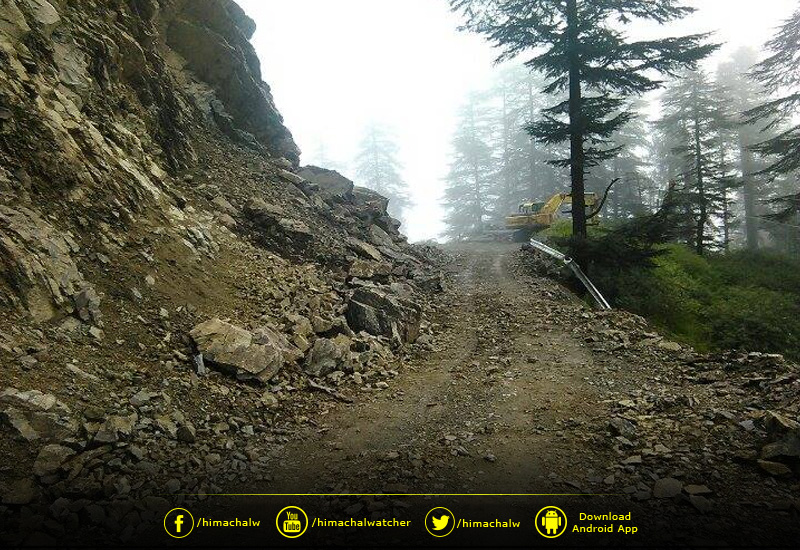 Now, a resident of Mashobra has brought to Himachal Watcher’s attention illegal mining being carried out on Mashobra-Bekhalti link road. On the name of road-repair, a private contractor has deployed machines to bring down the hill. This unlawful mining activity has reached a critical level, regularly triggering minor landslides. Driving or walking on this road has become highly risky business as debris keep falling now and then.

“The exact spot is located about five kilometers from Mashobra on Mashobra-Bekhalti road. Mining activity is regular for past 4-5 month. Two JCBs can be seen deployed at the spot to undertake mining work,” the complainant, who requested to maintain anonymity, told Himachal Watcher

“These people have no fear of government or court. This illegal activity of unscientific mining and large scale dumping continues despite HP High Court’s recent warning,” he added. 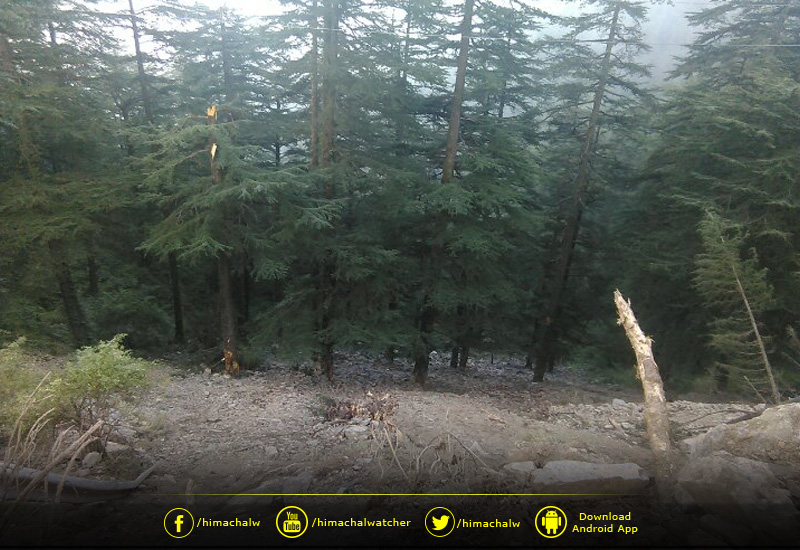 Illegal dumping of waste debris into forest has affected natural water resources, grazing fields of cattle are destroyed, and has already damaged hundreds of trees. Many trees are at verge of drying and dumped waste has destroyed new saplings too. 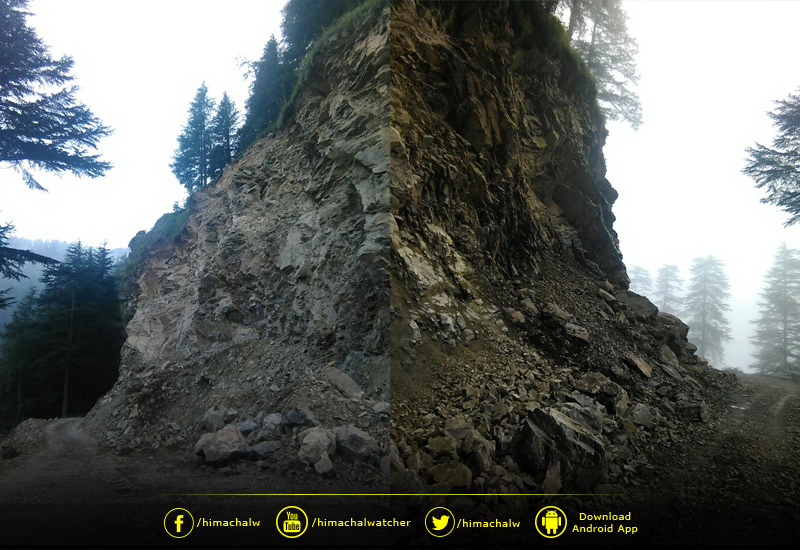 The elected panchayat and locals are silent and afraid to lodge any complaint for the contactor is a wealthy and influential man with strong political patronage, alleged the complainant.

Callousness of the forest and mining officials is intentional for the matter is in their knowledge. Office of Mashobra Range Officer is merely 2-3 kilometers away from the mining site, said the complainant. 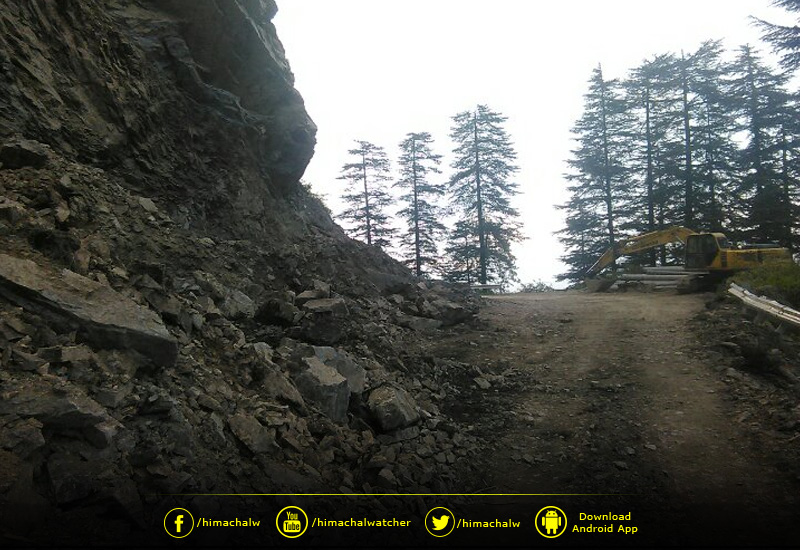 According to a report published in news daily Jagran a month ago, the DFO Shimla (Rural) Amit Sharma had admitted receiving complaint of illegal mining a few months back. A damage report was prepared to penalize the culprit, the DFO had claimed. But currently, there is no such complaint in his attention, he said.

Surprisingly, the mining on Mashobra-Bekhalti road still continues in broad daylight, the tippers are transporting quarried stone and waste debris for dumping despite presence of police. 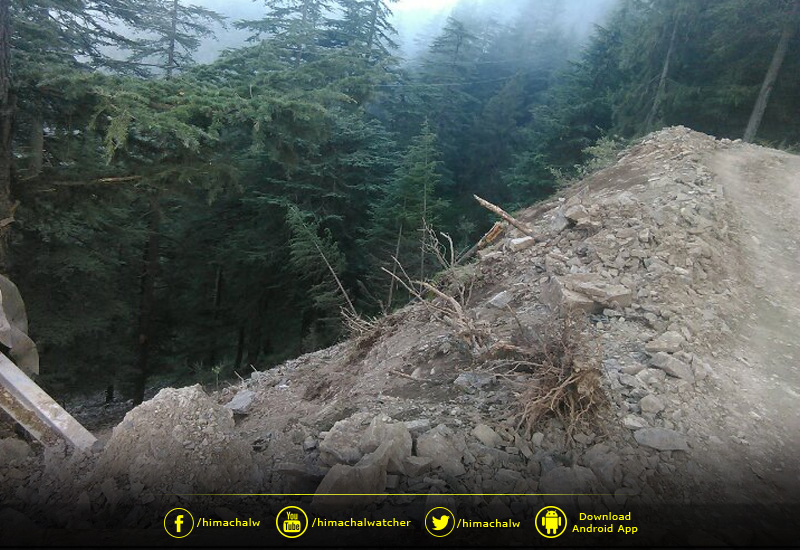 Apparently, such blatant violation of laws cannot be executed without cooperation of district administration and police department. Drilling down entire hills with men and machine isn’t a crime that can be executed under cover or in shade.

Speedy construction rate in Shimla and other towns of Himachal Pradesh has increased demand for construction material. The miners have found a potential market inside Himachal unlike Baddi-Barotiwala-Nalagarh (BBN) region where mined stone is illegally exported to neighboring state Punjab. Enormous wealth involved in mining has corrupted the system from top to bottom.

Unaware and unconcerned of ecological damages of unscientific and excess mining, politicians and mining mafia have become immune to the lash of law, which is otherwise meant to rip off the hell out of filthy, rich violators. No civilization can act in manner as foolish as the one that is upto destroying its own habitat.

Himachal Watcher has submitted a copy of this complaint to the Director of HP Industries Department Amit Kashyap .