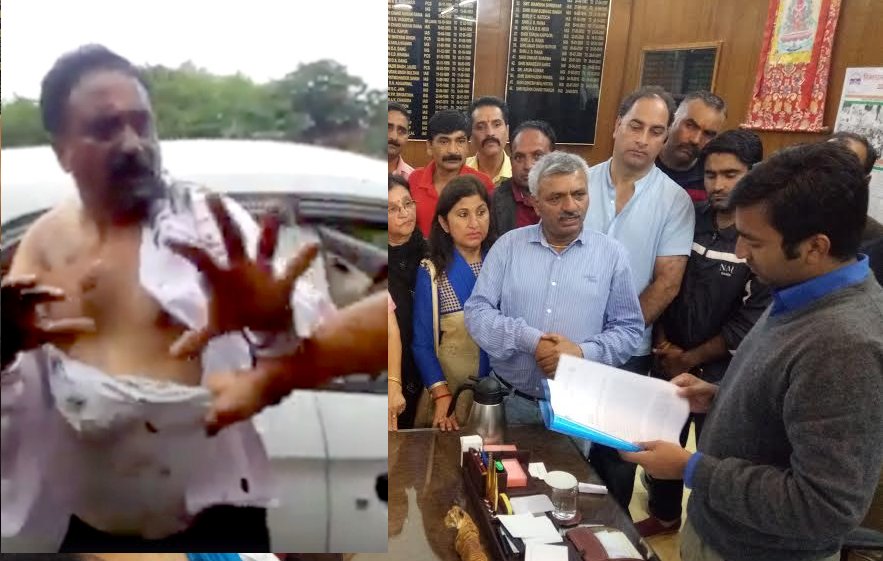 SHIMLA- In regard to case of assault on councillor in Shimla town, four arrested men have been released on bail after questioning. Yesterday, Shimla Police had arrested four out of six people who were mentioned in the FIR registered on July 3 by victim Sanjay Parmar, elected councillor of Kachi Ghati Ward of Shimla Municipal Corporation.

Parmar was allegedly assaulted by four accused, identified as Amit Kohli, Jitender, Gattu, Rohal with two others. In the FIR, Parmar has stated that he was returning from Chandigarh and another person, Nitin Madotra, also accompanied him.

He alleged that six men, including four identified accused, intercepted his car near Sonu Bungalow in Shimla, pulled out them from their vehicle and thrashed them brutally. They were using vulgar language while beating him and threatening repeatedly. The case is being investigated by ASI Bhagat Ram, I/O PS Shimla West. The accused were booked under Section 47, 149, 323, 504, 506 of IPC.

In media statements, Parmar alleged that all six men are workers of Youth Congress who assaulted him for joining BJP after winning election for the seat of councillor. He termed it a pre-planned attack on the behest of Vikramaditya, son of Chief Minister Virbhadra Singh and President of Youth Congress, Himachal Pradesh. All six men were repeatedly reminding him that he had betrayed Vikramadiya, Parmar told media.

He further alleged that arrested men are workers of Youth Congress, and they were campaigning for him prior to SMC elections. Parmar has demanded police security claiming he was given life threats by accused. He also alleged that the sole eyewitness, who was present with him, was also given life threat and warned of not giving any statement to police regarding the assault.

However, no statement has been released by Congress or Youth Congress in response to these allegation.

Enraged over this incident, State unit of Bhartiya Janata Party, several party leaders, and workers had staged protest at the CTO Shimla on Tuesday evening demanding action against culprits. The workers also submitted a memorandum to the Deputy Commissioner, Shimla. The workers demanded charging culprits with Section 307 (attempt to murder) as police charged them with only bailable charges.

Former Chief Minister, Prem Kumar Dhumal, also criticised the attack, and said the Congress doesn’t have any belief in democratic system. Rather, Congress, afraid of BJP’s victories in various Assembly Elections, has taken to dictatorship.

Suresh Bhardwaj, BJP MLA from Shimla, termed it as an expression of frustration after losing SMC polls. He said CM Virbhadra, who is facing serious corruption charges, has lost three out of four seats in his own constituency. Frustrated over its failure on every front, Congress has now taken to hooliganism, and has resorted to ‘gundagardi’, he said.

Police is trying to protect the culprits, and it’s evident from the fact that Parmar’s medical report didn’t mention fracture that he sustained on his nose, BJP alleged. Police took over six hours to conduct the medical so that facts could be manipulated to save the culprits, he said.

BJP  Spokesperson, Dr. Rajeev Bindal termed it as gundaraj of Congress government. It’s an attack on democracy, he said. Parmar is an elected candidate, and it’s matter of shame that a public representative isn’t safe in Himachal. The government is involved and the attack was pre-planed, he further alleged.

Former Horticulture Minister, Narinder Bragta, also lashed out at the Congress government, and said that law and order condition has deteriorated and the attack on the Councillor is clear evidence of it. Mafia raj has flourished throughout the state during the five year tenure of the Congress government. Current government is providing patronage to mafia, he alleged.

Goons of Youth Congress have launched similar attacks on BJP earlier too, in which a senior party worker had lost his eye. On the day of MC poll results too, Congress goons had attacked BJP workers, a case regarding which was registered and is under investigation, said BJP.