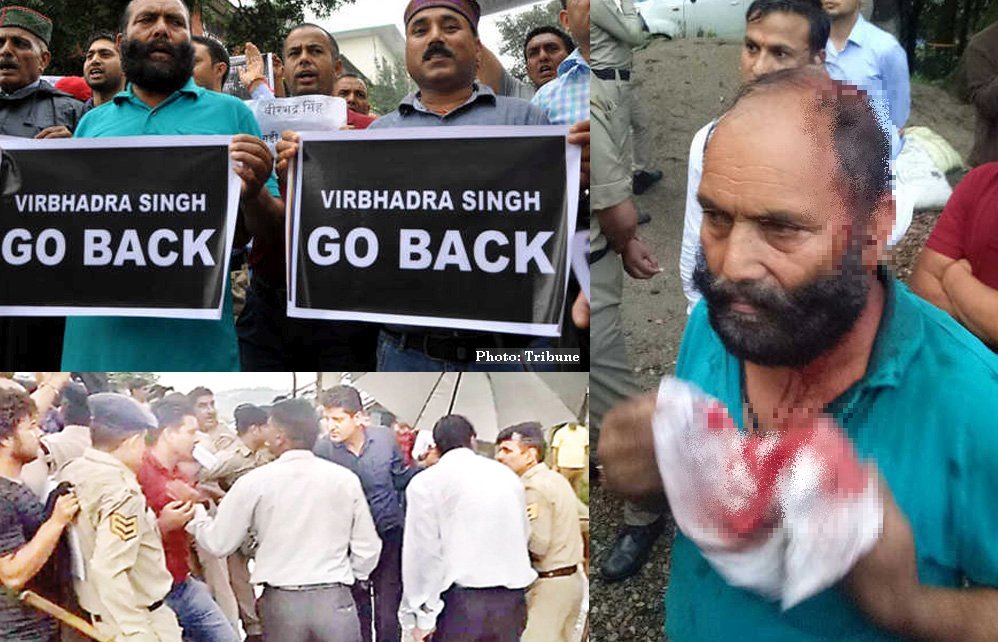 The protesters included Gaddi leaders (allegedly belonging to BJP Janjati Morcha), Youth wing of Schedule Tribe Unit of BJP, and other members of the Community, who were demanding an unconditional apology from the Chief Minister for his remarks.

The Chief Minister Virbhadra Singh’s controversial remark on the Gaddi Community has again charged the political atmosphere in Himachal Pradesh. Though he had offered an explanation for his remark on Wednesday evening, the situation only got uglier.

On Thursday evening, the fleet of the Chief Minister confronted a protesting crowd in Dharamsala of Kangra district while he was on his way to Dal Lake for an inauguration.

The protesters were dealt with a lathicharge in which some protesters sustained injuries. Pictures of a protestor bleeding after being hit on his head circulated on the social-media too. A video clip uploaded by a user on Youtube also threw light on the actual situation at the spot.

BJP leader Kishan Kapoor, who was reportedly accompanied by some supporters, tried to stop the convoy of the Chief Minister Virbhadra Singh.

As per Ramesh Jaryal, Kangra district chief of the Schedule Tribe, the people were protesting peacefully against the Chief Minister when the police lathicharged.

As per the police, the protestors allegedly turned hostile and scuffled with policemen on duty. They tried to block the Chief Minster’s fleet and police had to resort to use of force to disperse the crowd, said the police sources.

As per sources, the protestors included Gaddi leaders (allegedly belonging to BJP Janjati Morcha), Schedule Tribe Unit of BJP, and other members of the Community, who were demanding an unconditional apology from the Chief Minister for his remarks.

The opposition launched an attack post the cane-charge. The ex-Chief Minister and BJP leader Prem Kumar Dhumal and Shanta Kumar called it a murder of democratic rights.

They said that Chief Minister should watch his words before delivering controversial statements.

A few days ago, during his visit to Una district, the Chief Minister was targeting the State President of the BJP, Satpal Satti. The Chief Minister was seen and heard on news clips saying, “सत्ती अध्यक्ष हैं तो क्या, अध्यक्ष तो गद्दी समुदाय के भी होते हैं”( What if Satii is the President (of BJP). Gaddi people also have a president).

After he came under fire for this remark and Gaddi Community leaders demanded a sincere apology for it, the Chief Minister offered an explanation on Wednesday evening.

He said his statement pertaining to President of Gaddi Board was concocted and misinterpreted by the media. It is an old habit of BJP to blow issues out of proportion, he added.

He explained, he meant that the President of State Gaddi Kalyan Board had more followers and respect than the BJP State President.

However, the Gaddi Community and BJP are not buying it. The lathicharge has further worsened the condition. The leaders have warned of another protest against the lathicharge.

Earlier, the Chief Minister has faced criticism for alleged insensitive remarks over grieve incidents like the deaths due to Swine Flu and the mysterious death of forest guard Hoshiyar Singh.