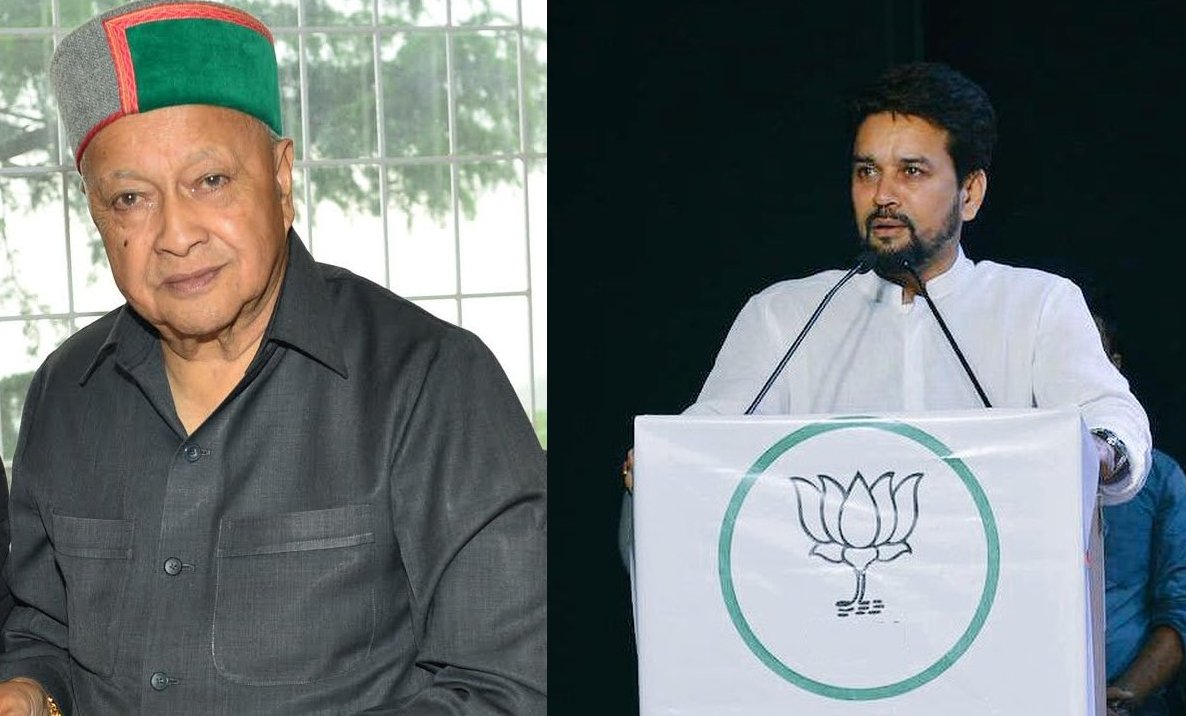 Most of the announcements made by CM over the past 5 years have yielded negligible results on the ground be it in the field of education, public work, healthcare, travel or tourism.

Shimla: To make his presence felt in the political arena, Anurag Thakur, Member of Parliament, Hamirpur, keep trying. At times he does by either giving spicy statements over the Congress-ruled government and the Chief Minister Virbhadra Singh or other activities like inaugurating Centrally sponsored Pradhan Mantri Grameen Sadak Yojna,(PMGS) projects.

Presently, the opposition is targeting the Chief Minister over last-minute announcements before the code of conduct comes into force ahead of the Vidhan Sabha elections.

BJP is alleging that the Chief Minister is making unnecessary announcements without possessing required budget.

On Wednesday, Anurag also took a jibe at the Chief Minister Virbhadra Singh and said that the last minute announcements are showcasing desperation to woo the public.

I would like to ask Virbhadra Singh Ji what his Government busy was doing for the past 5 years. Why did it not consider public and State welfare during that period?

It is extremely unfortunate that most of the announcements made by CM over the past 5 years have yielded negligible results on the ground be it in the field of education, public work, healthcare, travel or tourism, Anurag said.

Now with the elections approaching, the CM is making all sorts of announcements just to dupe the public and earn brownie points.

Had he spent time with people he would have known that they will not fall prey to his false announcements anymore and he cannot befool them with any of his desperate tactics now, he said.

Since the last five years, the Chief Minister was busy in ensuring his own welfare and attending his corruption cases. He could not attend to the public, he said.

The fear of losing the election has sent shivers down his spine. Now he is running in all directions making frivolous announcements, he said.

As expected, Anurag compared the percentage of cut announced in the VAT on petrol and diesel by HP government with other states.

On the directive of the Central government, the State Government has lowered the VAT by 1% which in working comes to 52 paisa on petrol and 43 paisa diesel, he said.

Had the State Government been concerned about the welfare of the public, then it would have made a significant cut in the VAT like other States such as Gujarat or Maharashtra, he said.

The government was forced to lower the VAT due to the fear of losing elections, he said.

However, the BJP MP is himself trying to fix a huge dent on his image that was badly dented after his removal as the BCCI President by the Apex Court for alleged contempt of court and perjury by lying to the court after taking an oath of telling truth.

Virbhadra lied to Rahul Gandhi about allowances given to unemployed youth : BJP