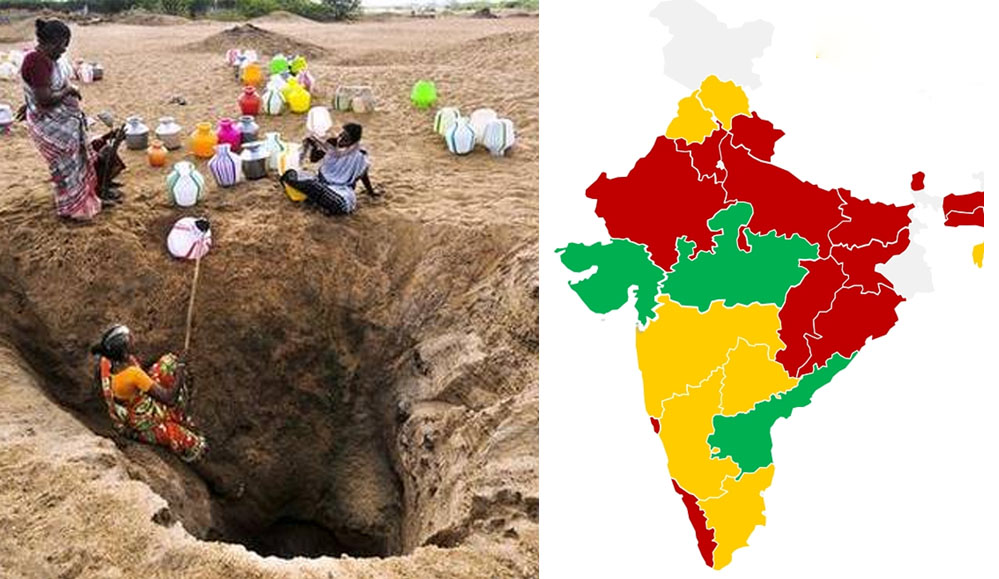 India is suffering from the worst water crisis in its history and millions of lives and livelihoods are under threat. Currently, 600 million Indians face high to extreme water stress and about two lakh people die every year due to inadequate access to safe water. The crisis is only going to get worse. By 2030, the country’s water demand is projected to be twice the available supply, implying severe water scarcity for hundreds of millions of people and an eventual 6% loss in the country’s GDP. 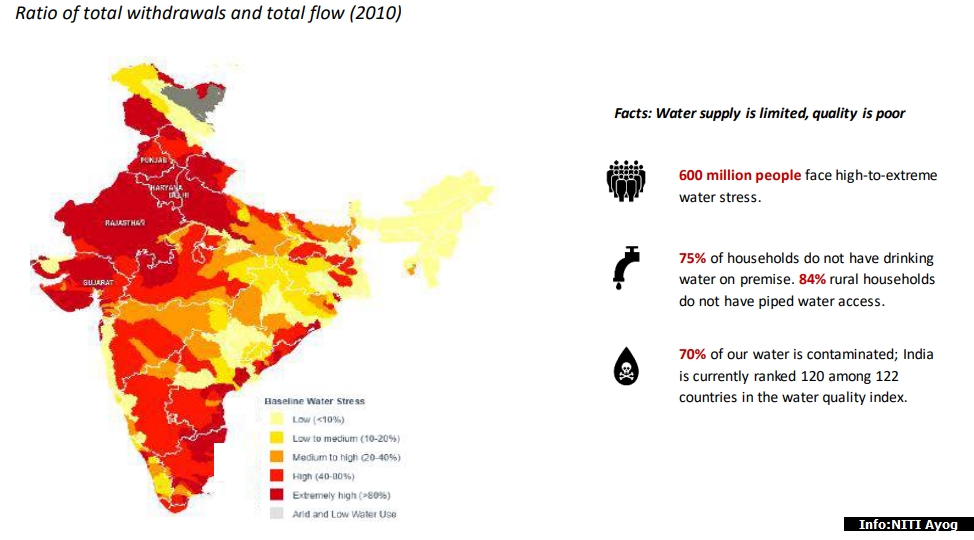 As per the report of National Commission for Integrated Water Resource Development of MoWR, the water requirement by 2050 in high use scenario is likely to be a milder 1,180 BCM, whereas the present-day availability is 695 BCM. The total availability of water possible in the country is still lower than this projected demand, at 1,137 BCM. Thus, there is an imminent need to deepen our understanding of our water resources and usage and put in place interventions that make our water use efficient and sustainable. 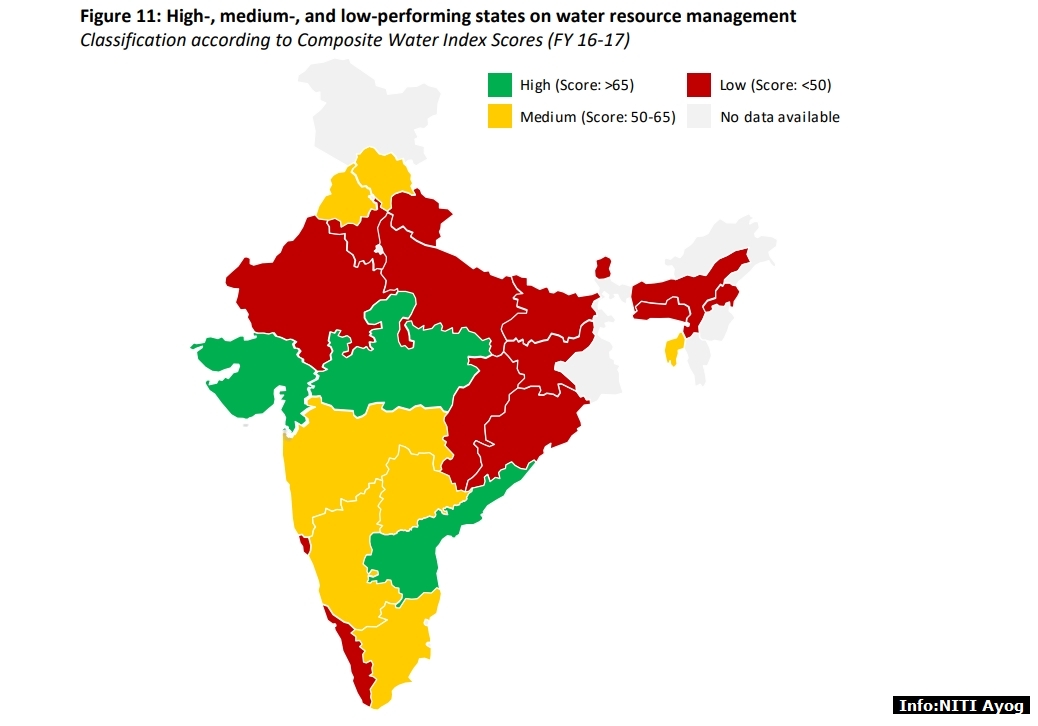 India is undergoing the worst water crisis in its history. Already, more than 600 million people are facing acute water shortages. Critical groundwater resources – which account for 40% of our water supply – are being depleted at unsustainable rates.

Droughts are becoming more frequent, creating severe problems for India’s rain-dependent farmers (53% of agriculture in India is rainfed). When water is available, it is likely to be contaminated (up to 70% of our water supply), resulting in nearly 200,000 deaths each year. Interstate disagreements are on the rise, with seven major disputes currently raging, pointing to the fact that limited frameworks and institutions are in place for national water governance.

Indeed, if nothing changes, and fast, things will get much worse: best estimates indicate that India’s water demand will exceed supply by a factor of two by 2030, with severe water scarcity on the horizon for hundreds of millions.

Water Index scores vary widely across states, but most states have achieved a score below 50% and could significantly improve their water resource management practices. The Water Index scores for FY 16-17 vary from 76 (Gujarat) to 26 (Meghalaya), with the median score being 49 for Non-Himalayan states and 31 for North-Eastern and Himalayan states. Gujarat is the highest performer, closely followed by other High performers such as Madhya Pradesh and Andhra Pradesh. Seven states have scores between 50-65 (including two North-Eastern and Himalayan states) and have been classified as Medium performers. 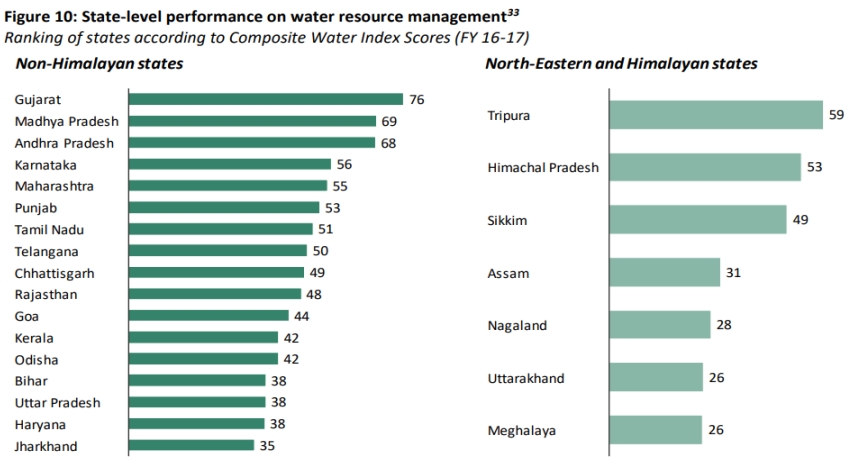 Alarmingly, 60% of states (14 out of 24) have achieved scores below 50 and have been classified as Low performers. Low performers are concentrated across the populous agricultural belts of North and East India and among the North-Eastern and Himalayan states.

Most states have achieved less than 50% of the total score in the augmentation of groundwater resources, highlighting the growing national crisis—54% of India’s groundwater wells are declining, and 21 major cities are expected to run out of groundwater as soon as 2020, affecting 100 million people. Further, 70% of states have also achieved scores of less than 50% on managing on-farm water effectively. Given the fact that agriculture accounts for 80% of all water use, this underperformance, as discussed in the analysis of low performers above, poses significant water and food security risks for the country.

Finally, states have also performed averagely on providing safe drinking water to rural areas. With 800 million people or 70% of the country’s population, living in rural areas, and about two lakh people in the country dying each year due to a lack of access to safe water, this is one of the most critical service delivery challenges in the world.

Encouragingly, several water-scarce states are the leaders in Index performance. Several of the high and medium performers—Gujarat, Madhya Pradesh, Andhra Pradesh, Karnataka, Maharashtra, Telangana— are states that have suffered from severe droughts in recent years.

Overall, there is large inter-state variation in Water Index scores, but most states have achieved a score below 50 (out of 100) and need to significantly improve their water resource management practices. The Water Index scores for FY 16-17 vary from ~76 (Gujarat) to ~26 (Meghalaya), with the median score being ~49 for Non-Himalayan states and ~31 for North-Eastern and Himalayan states. Gujarat is the highest performer, closely followed by other high performers such as Madhya Pradesh and Andhra Pradesh. Most other states are clustered around the 40-60 band. Seven states have scores between 50- 65 (including two North-Eastern and Himalayan states) and have been classified as Medium performers.

This data was compiled and collected from 24 states. The data was collected for two years—the base year of FY 15-16, and FY 16-17—thereby enabling not only a benchmarking of the current water performance of states but also the study of the evolution of this performance across the last two years.

However, 60% of states (14 out of 24) have achieved scores below 50 and have been classified as Low performers. Most North-Eastern and Himalayan states are the lowest performers on the Index, but a few have scores that are comparable to or better than most of the larger states. Assam, Nagaland, Uttarakhand, and Meghalaya have the lowest Index scores (in FY 16-17) out of all states, ranging from 26 to 31. This low performance involves low scores across almost all indicator themes, with several states scoring zeroes or not submitting data for as many as seven indicators (out of 28).

On the other hand, Tripura and Himachal Pradesh have high scores, with both performing well in supply-side management (irrigation and watershed development) and water-supply provision (rural and urban).

Baddi Family Buried in Garbage by BBNDA Gets Relief from High Court, Authorities Directed to Relocate It

Story of Tanuj Kalia, CEO Lawctopus – From Growing up in Himachal’s Small Town to Running a Successful Start-Up