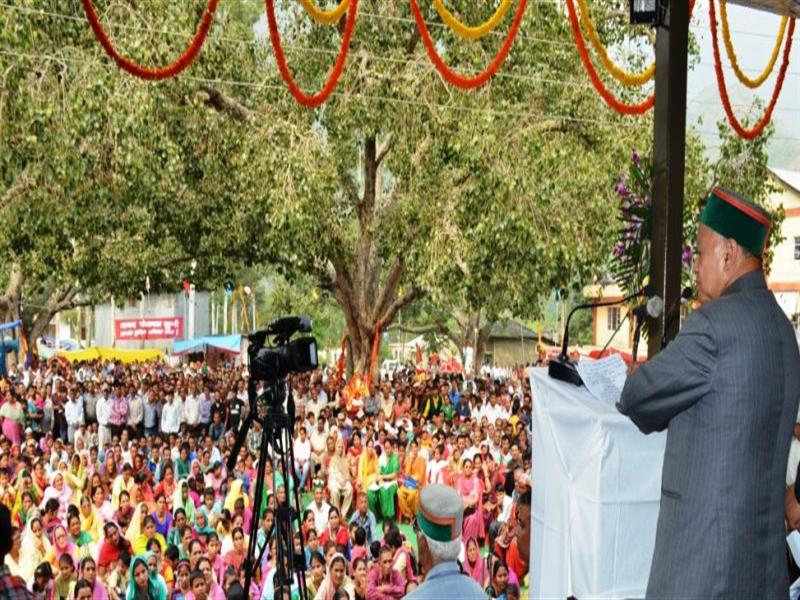 Chief Minister Virbhadra Singh while addressing a massive gathering at Sunni Mela ground on the occasion of closing ceremony of the Sunni district level Dussehra festival in Shimla district today said that our traditions and customs needed to be preserved at any cost and the coming generations must strengthen the same.

“In the absence of preservation of traditions and culture no Nation can prosper”, said he. Counting developments in the area he said that three industrial training Institutes had been opened in the Shimla Rural segment at Jalog, Dargi and Sunni besides four Primary Health Centres at Totu, Gulthani, Nehra and at Dharogra. Two Community Health Centres were also opened at Halog and Jalog.

The Chief Minister said that Rs 105 crore IPH scheme was coming up for the area which would benefit 41 Gram Panchayats and solve the drinking water and irrigation problems of the people. He said that nineteen roads amounting to Rs 40 crore had been sanctioned to connect the remote villages of the area and 13 roads were likely to be sanctioned soon on which a sum of Rs 40 crore were being spent. Besides, two bridges amounting to Rs four crore were under construction.

He also assured opening of Block Medical office at Sunni.

He also inaugurated the ‘Dussehra Kala Manch’ at Dussehra ground Sunni constructed at a cost of Rs 13 lakhs for which he announced to give the cost of entire completion cost.

He said that Shimla Rural was his home segment and he was working whole heartedly for the development of the area. He added that developmental works had been speeded up in the area during past one and half years and special emphasis had been laid on opening more educational, health institutions besides providing road connectivity to the left out villages.

He also released the Audio CD of Sh Dharam Pal Bhardwaj and Uma Kaundal on the occasion.

The Chief Minister also inspected the ongoing work of the Civil Hospital, Sunni being constructed as a pilot project under pre-fab technology and will be having 30 bed facility besides 20 already existing and said that the inauguration of the same would be done on 25th Nov 2014.

The Chief Minister en-route Sunni inspected Old age Care home being constructed at Basantpur being constructed at a cost of Rs 2.45 crore and directed to complete it within a stipulated time period. He also directed for construction of Panchayat Hall in the premises’ of BDO office Basantpur with intake capacity of as many as 100 people and asked to spruce up the surroundings. He also asked the PWD authorities to take over the Reog road in Basantpur for maintenance and improvement.

Vikramditya Singh, President State Youth Congress while speaking on the occasion said that with the support of Punjab National Bank a Multipurpose Vocational Training Institute will be opened at Sunni. He recalled the development works undertaken in the area during the present Governments regime and exhorted youth to come forward and co-operate in the development of the State. He also demanded the shifting of Block Medical officers Office to Sunni and said that the Government should keep in mind the interests of the youth while framing the welfare policies.

Sub-Divisional Magistrate, Shimla Gian Sagar Negi welcomed and honoured the Chief Minister and other guest present on the occasion.

A colorful cultural function was also organized on the occasion and CM announced a sum of Rs 25 thousand for the children for performing cultural programme and for the dresses.