However, some journalists and majority of public expressed doubts over the investigation and raised several questions. People still sense a conspiracy to save real culprits, and are demanding inquiry from Central Bureau of Investigation (CBI). The police denied to comment on the photographs of some people allegedly shared on Chief Minister Virbhadra’s Official Facebook wall. People are asking why those people are not in the picture anymore.

Shimla: Eight days after the discovery of the naked dead body of a girl, who was raped and murdered in Halaila woods in Kotkhai, Shimla, State Police has finally made a breakthrough and arrested six people. The barbaric case had shook the entire hill state that was considered a peaceful and safer place for females.

It was a blind murder case that was solved within 55 hours of formation of Special Investigation Team (SIT), Director General of Police, HP, Somesh Goyal said in a press conference held at the State Police Headquarters, Shimla, today.

All accused were arrested from Kotkhai, where they were currently settled.

In 55 hours, the SIT questioned 85 people and analysed 28 call details. The circumstances of the case were altogether different than the Nirbhaya case as there was no dying declaration of the victim, eyewitness or CCTV cameras. The police had to start from scratch due to lack of any initial lead. The evidences on ground were also washed away by rain, said the IG.

Police have clinching physical, technical, and forensic evidence to prove the crime of the arrested accused, claimed the IG.

However, some journalists and majority of public expressed doubts over the investigation and raised several questions. People still sense a conspiracy to save real culprits, and are demanding inquiry from Central Bureau of Investigation (CBI). The police denied to comment on the photographs of some people allegedly shared on Chief Minister Virbhadra’s Official Facebook wall. People are asking why those people are not in the picture anymore.

Clearing ambiguity spread by media reports, Zahur Zaidi confirmed that the girl was sexually assaulted in the same woods, just 10 meters away from where her body was dumped. She was dragged to the thorny bushes and accused took turns to rape her.

Asphyxiation was cited as the cause of death as accused tried to suppress her screams by shutting her mouth. The body had scars and bite marks on several parts, he added.

Earlier today, police had arrested Ashish as the first accused, and by evening it claimed arrest of all six accused.

In the press conference, the DIG admitted it was a gruesome and barbaric act as revealed by the post-mortem of the body. Such an act of barbarity cannot be executed by a normal human being, and the arrested accused have presented a horrific scene here, he said.

Connecting most of the links, the DIG disclosed that one of the accused, Raju, was already familiar to the girl. Raju often offered a lift to the girl in his vehicle. The girl had twice accepted the offer of a lift. On July 4, Raju, who was driving with two others, saw the girl walking and offered her lift. The girl accepted the lift, he informed.

Allegedly, the two of them were under influence having consumed almost two bottles of liquor. The accused stopped the vehicle at an isolated spot in the woods and got out of the vehicle. They planned the crime on the spot and dragged the girl out of the vehicle.

However, involvement of other three accused were not described in the conference.

The girl was Class X student in the village school. She had gone missing on July 4, and her naked body was found on the morning of July 6. After post-mortem and forensic investigation, it was confirmed that the girl was first raped and then choked to death.

The pictures of her dead body went viral on social media and created distress among people who took to the street demanding the arrest of the culprits.

DIG Somesh Goyal congratulated the SIT for cracking the blind murder case within 55 hours. He said, it was perhaps the first-of-its-kind case in Dev Bhoomi Himachal, and that he is satisfied with the efforts of his men.

More details would be revealed in coming days, the investigation is still under process to dig out more facts. 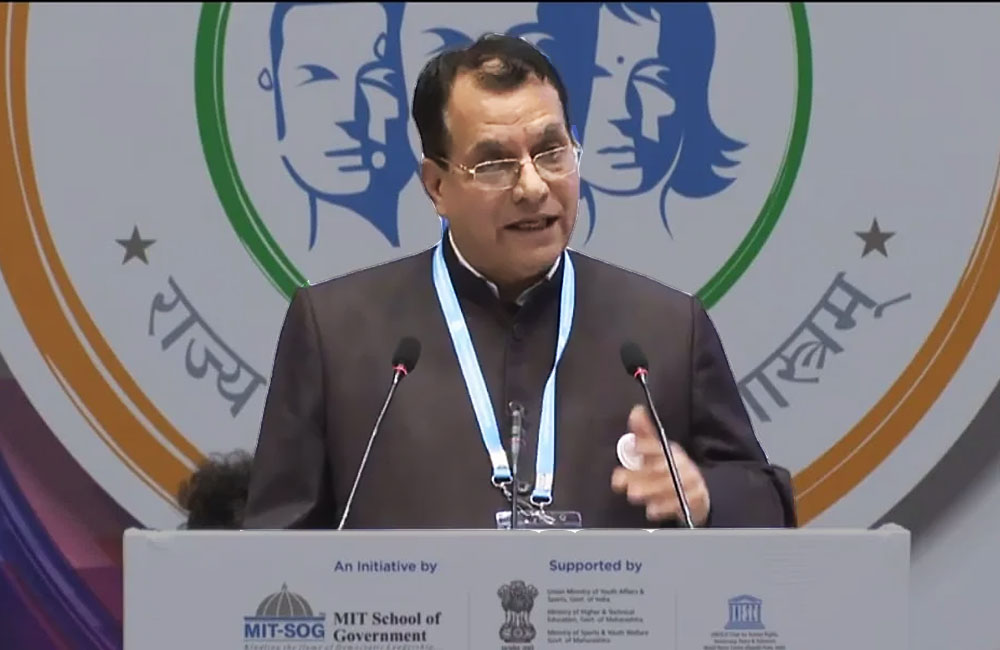 Shimla-Education Minister Suresh Bhardwaj, while addressing youth at the 10th Bhartiya Chatra Sansad in New Delhi said, social media has many benefits like connectivity, easy access but there is a need to exercise caution while using this tool.

Sometimes social media spreads misinformation and fake news, we should be careful about what information we are consuming. We should learn to understand the difference between real and virtual life, he added.

The Education Minister also said that the youth should use their own identity and uniqueness and not rely too much on social media while making decisions.

The basic objective of education is to become a good citizen and to become successful in our professional and personal lives, he said.

The Education Minister was delivering a lecture on ‘Learn before you lean: Following social media and celebrities’ at the second session of the event which is being organised from 20th to 23rd February at Vigyan Bhavan New Delhi by Rahul Karad, Founder and Convenor of Bhartiya Chatra Sansad (BCS).

However, the degrading quality of education in the State’s government schools hardly suggests that the education minister is actually committed to create good citizens.

The massive fee hikes by Himachal Pradesh University are making education inaccessible. Private schools are prospering owing to poor quality of education in government schools. Parents are left with no choice but to pay hefty fees to private schools to ensure that their children get a better academic environment and basic facilities. At the same time, the ruling government in Delhi has proved that the academic environment and infrastructure of government schools can be changed for good easily.

Though politicians in India hardly follow what they preach, it is indeed the need of the hour that we filter what is being served on media and social media before believing it and making decisions based on it.

After witnessing unethical use of social media by political parties, during 2014 and 2019 General Elections, and lately in the recently concluded Delhi Assembly elections, for hate speeches, propaganda and spreading misinformation to manipulate voters, going completely against the ethics of politics, it is sarcastic to hear a politician asking people to beware of fake news and misinformation spread through social media. Not only politicians but mainstream media has also turned itself into a paid circus.

On some channels, journalists have even assumed the roles of judges instead of simply reporting facts. Together with paid media and social media, India’s politicians and religious organizations are experimenting with a divisive and communally polarizing politics. During the recent Delhi elections, journalists and politicians even turned themselves into jokers without caring about ethics and  their responsibility towards the nation. 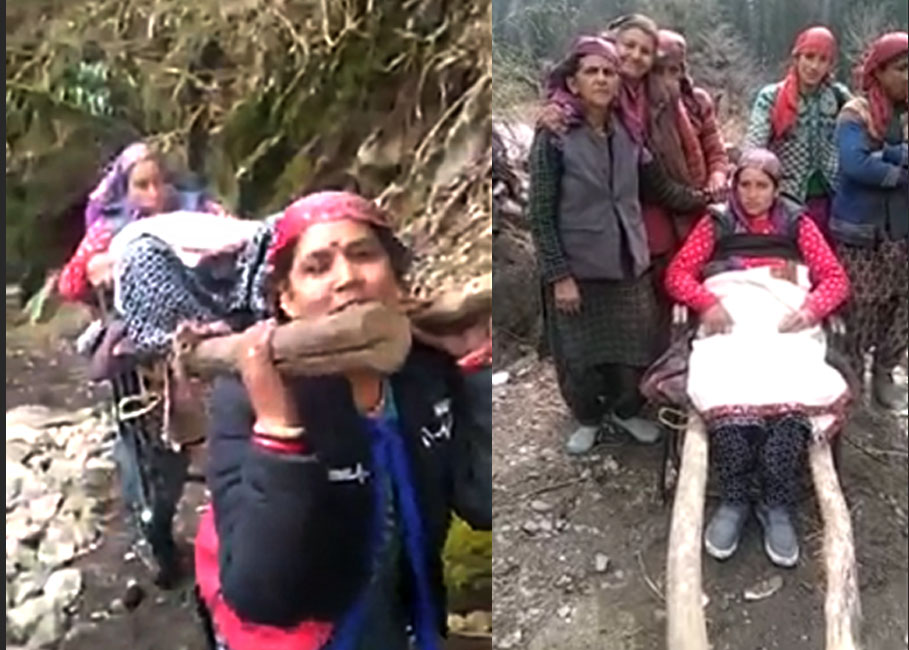 However, the question over government’s claims arises after watching videos where people in Himachal’s rural area still don’t have access to even basic health facilities due to lack of ambulance roads. Residents carry patients on their shoulders in palanquins for several kilometers to reach the nearest road. Videos and reports of such cases regularly appear in regional pages of Hindi dailies, indicating hollowness of government claims of development.

A video showing the plight of villagers in Sainj area of the district Kullu has been posted by locals where some local men and women are carrying a female on a makeshift palanquin on a tough acceding trail.

On Sunday morning, Sunita, experienced labour pain. The family asked other villagers for help. They prepared a make-shift palanquin by tying a chair to two logs.

When asked about the situation, the women said they are carrying a pregnant woman, Sunita, to hospital because the nearest motorable road is 18-20 kilometres far from their village Shaakati in Garapaarali (गाड़ापारली) panchayat. Two other villages in the same panchayat – Maraur and Shugad-also faces the same problem when they need to access health services.

The women said it took them over eight hours to carry the pregnant lady upto the road from where they arranged motorable transport to reach Banjar hospital.

Furious over the government and politicians, local women can be heard alleging that government of its indifference to their grievances and lack of facilities.

“Government will trace and find us anywhere when it is about seeking votes but no one comes back to attend us. Whenever villagers get sick, we carry them on shoulders to access health services,”

an elderly woman said while describing the plight of villagers.

In another clip, a woman carrying the palanquin can be seen complaining about the lack of an ambulance road.

“We need an ambulance road. That’s our demand,”

she said while gasping due to exhaustion.

As per another media report, the panchayat Pradhan, Bhaag Chand and other members of the panchayat also confirmed facing a huge inconvenience due to lack of a motorable road. They said governments kept changing but their panchayat did not get a road.

Not just medical facilities, but villagers also complained that even most basic facilities are still out of their reach due to apathy of the government.