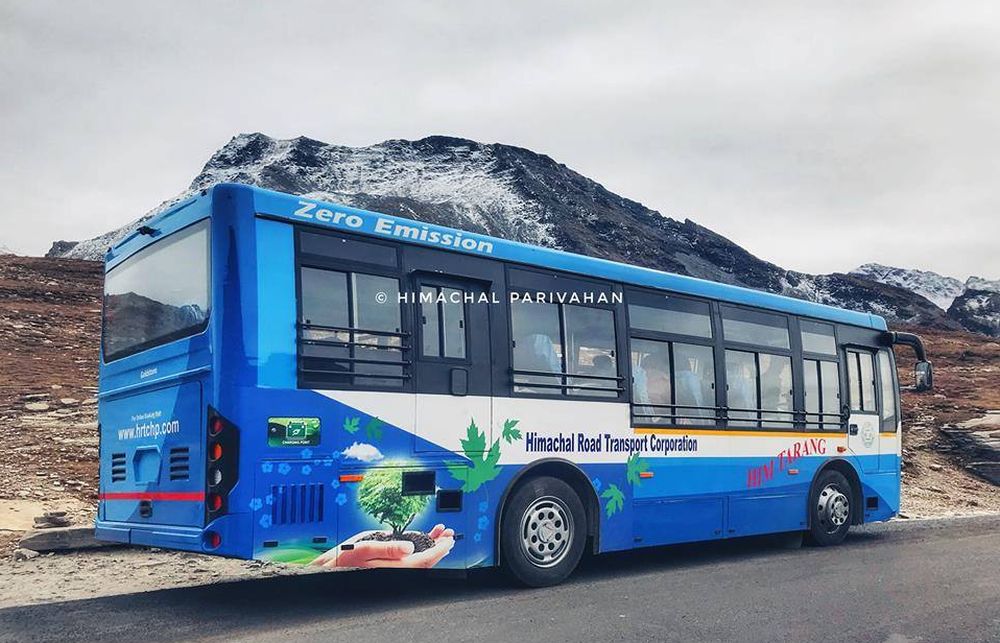 Shimla: The Chief Minister Jai Ram Thakur was supposed to flag-off the much awaited electric bus service on April 30, 2018, from Manali to Rohtang for the tourists.  However, it was cancelled at the last moment.

It doesn’t sound like a co-incident that the members of the Him Anchal Taxi Union, Manali, had approached the minister urging him to not to begin the service as it was hitting their livelihood. Otherwise, a protest was already planned ahead of the CM’s visit to Kullu.

However, the ceremony was cancelled suddenly.

The peak tourist season beings in May, therefore, the taxi operators are cheering as the tourists won’t have any other option but to hire expensive services of the cabs.

Himachal Pradesh had not only become the first state to commission 100 percent battery-powered electric buses but also the first in the world to ply them at an altitude of 3, 978 meters (13,000 feet) on mountainous terrain of Pir Panjal ranges of the eastern Himalayas when Transport Minister GS Bali flagged off the first bus on September 22, 2017.

The decision had faced protest from the local cab operators back then too.

However, it was on November 14, 2018, that two of the newly commissioned electric buses on Manali-Rohtang Pass stretch begun ferrying passengers on a regular basis. The HRTC was charging Rs. 600 per seat for a two-way trip starting from Manali to the Rohtang snowline.

The electric buses are manufactured in a tie-up with Chinese firm BYD Auto Industry Co Ltd. Each bus costs 1.70 crores and Himachal had bought 25 of them at that time. The total cost of this deal was Rs. 48 crores.

The CM, however, said he was not under any pressure and some unfinished formalities caused the cancellation.  He did not mention anything specific about the period for which the introduction of the e-buses would remain pending.

The CM also contradicted his statements given to media in which it was suggested that the government was looking to find a middle-path to provide relief to the taxi operators. Also, the taxi union said the operators were ensured that the e-bus service would be put on hold.

The decision was taken by the previous government after the National Green Tribunal had lashed out at it for unchecked environmental degradation around Rohtang Pass due to increasing load of domestic and international tourism.

The taxi operators had been protesting against the NGT orders as well as the plying of electric buses. The previous government could not ignore the orders despite the protests.

In 2014, taking note of research works pointing out fastening of glacier melting in the vicinity to Rohtang and blacking of the snow due to heavy vehicular emissions, the NGT had restricted the entry of vehicles to only 1,000 including both diesel and petrol.

The transport minister is also of the view that the developmental works would be taken up only after considering the interests of the people first.

Though the decision would benefit the local taxi operators and the hospitality industry, it can’t be done at the cost of environmental degradation. It must not be forgotten that the tourism industry exists because of the natural beauty and purity of the air in Rohtang Pass.

Therefore, we should hope that the government would not take such crucial decision to temporarily please a section of the hospitality industry.  The environmental protection lies at the root of human survival and delay in taking measures to avert it will only make it worse.

We hope that the government would actually come out with some productive solution to ensure the protection of both – the interests of the locals as well as environmental protection.