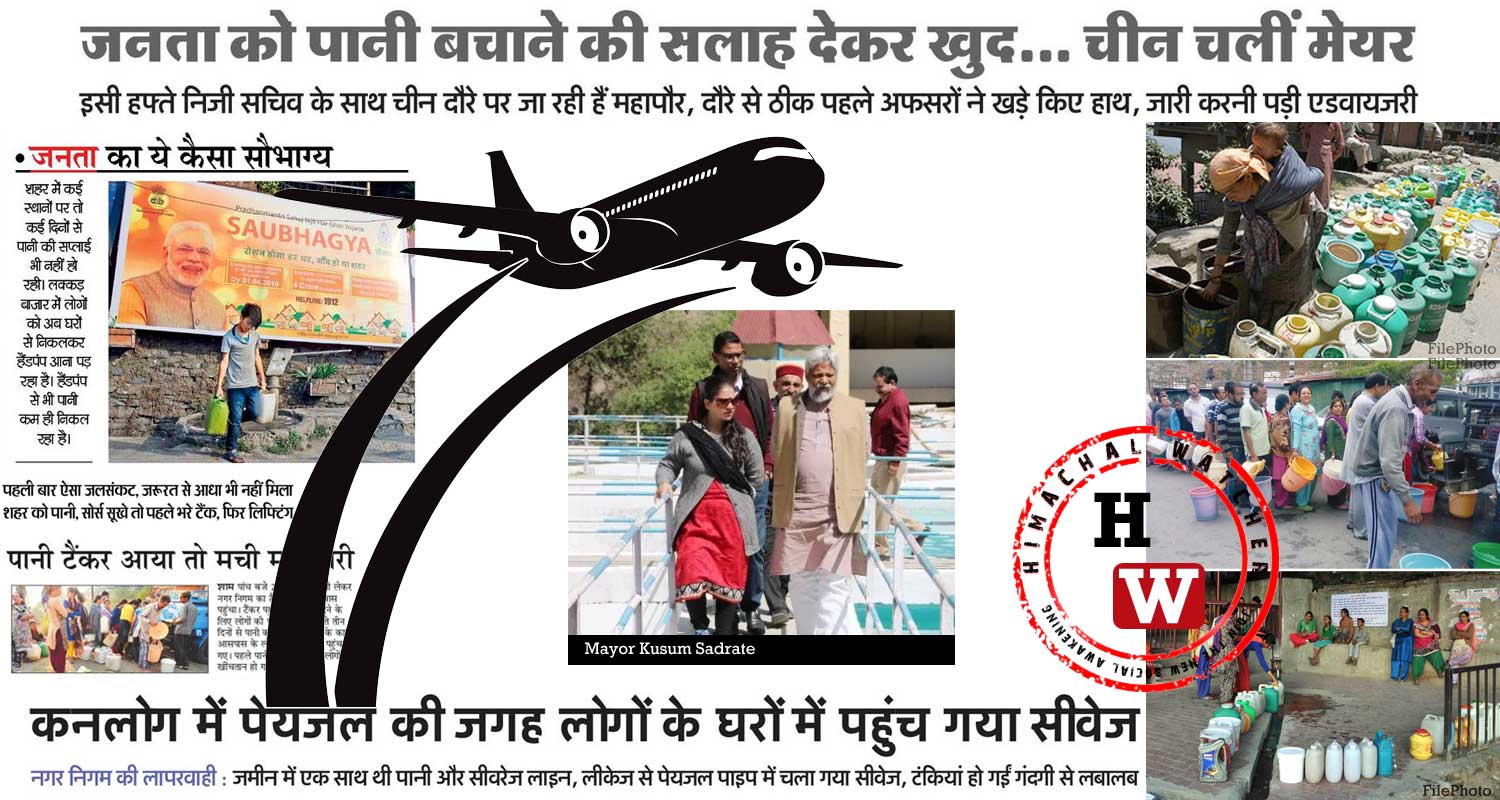 Himachal Watcher tried to confirm the urgency behind the Mayor’s visit to China in times of such crisis when she should have been brainstorming with her councillors to come out with a solution.

Shimla: The Mayor of Shimla town, Kusum Sadret, on Friday left for China, away from the chaos caused by the ongoing water-crisis that has reached an alarming level. Her Ward Councilors are shocked that the Mayor did not even conduct a single meeting to attend to the water crisis in the town, which is only worsening with each passing day.

Yesterday, she remained in the news as SMC supplied ‘sewerage contaminated’ water to the residents of Kanlog Ward. The public and opposition parties are seeking action against the responsible officials for playing with the health of the people by supplying them contaminated water in a time of acute water shortage.

This is not the only reason to worry. The people are forced to fetch water from natural water sources, which are already declared contaminated. Sadly, the Government and the SMC forgot the deadly jaundice outbreak in 2016 that had killed about 32 people within a few months.

The Mayor doesn’t deserve to be at the SMC because she has failed on every front ranging from sanitation to supply of clean and sufficient drinking water to the people, the former Mayor of Shimla, Sanjay Chauhan said.

He has demanded that the government should take the matter seriously and initiate criminal proceedings against the responsible officials. Meanwhile, the Councillors had yesterday planned a protest and gherao of the Mayor and Deputy Mayor. However, they did not find them in office.

The public is receiving a supply of water after a gap of four to five days in most wards while some others are going without water for over a week now.

The water-crisis has brought the hospitality industry in Shimla on its knees. People are forced to buy mineral water as public taps and filters in offices, schools, hospitals are running dry for days. The Shimla Municipal Corporation doesn’t even have sufficient water-tankers to make up for the shortage of water.

A sort of protest erupted among the people as well as the Councilors against the Mayor. The Mayor was even gheraoed by the people in some localities.

While the protest of the Congress Ward Councilors demanding the resignation of the Mayor and Deputy Mayor was obvious, Bhartiya Janata Party’s own Councilors have come out openly criticizing the way Mayor left them behind to face the wrath of the people.

Leaving the battleground at such a time is condemnable.

It appeared that there must be some urgent reason behind discarding distressed people from the list of her priorities for a visit to foreign.

Himachal Watcher tried to confirm the urgency behind the Mayor’s visit to China in times of such crisis when she should have been brainstorming with her Councillors to come out with a solution. The Deputy Mayor did not pick up the phone. Everyone else at the Shimla Municipal Corporation said they were not aware of the purpose of the visit.

He said he could only confirm that she has left for China.

The only hint available is some unofficial reports that suggested that Sadret would be attending the International Mayor’s Conference in China. Otherwise, her visit is a sort of secret mission, which is why no one is aware of it. Maybe, she’ll bring a solution to the ongoing chaos from China.

The Councilors are blank as the people of their wards demand supply of water on at least alternate days. The Mayor made a wrong choice, the Councillors agreed, adding that a leader should not run away when the people need him/her most.

The public can be heard comparing the tenure of Sanjay Chauhan with Kusum Sadret. We were better off with previous MC, a couple of shopkeepers at Boileauganj heard discussing.