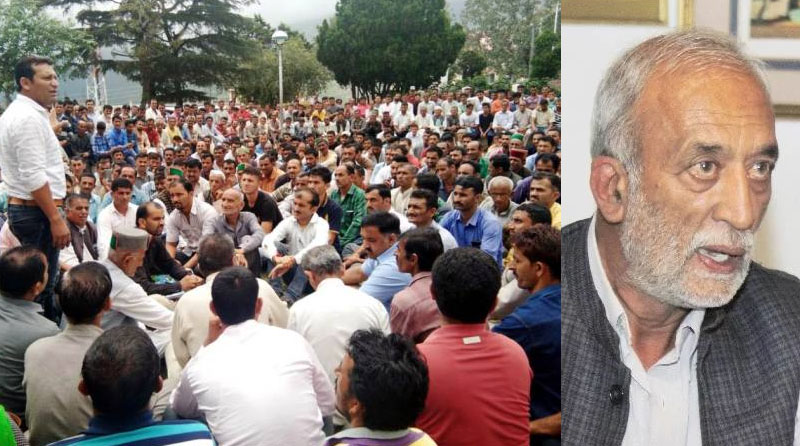 Sirmaur: After outrage and protests over the alleged murder of Kedar Sing Jindan, the Himachal Pradesh Police has formed a special investigation team (SIT) to probe the case. The six-member SIT led by the Additional Superintendent of Police (ASP) Virender Singh Thakur comprises of SHO Rajgarh, SHO Majara, SI Paonta Sahib, and others.

It was informed that no member of the Shillai police station was included in the SIT to ensure a fair probe. The SIT has begun to investigate the case and questioned over two dozen people in Bakras village on Tuesday.

The forensic team has also taken samples from the spot, which have been sent for testing. Reports are coming that the police has received the report of the post-mortem of Jindan’s dead body.

Meanwhile, a person, who claimed himself to be an eyewitness in the case, was seen giving a statement to the media. The video was posted by the Dalit News Network (DDN) in which this person is claiming that he saw two accused and three others beating Kedar and then running over with an SUV. However, the police have not confirmed anything in this regard.

A newly form group calling itself Rajput Sabha is protesting against the arrest of the accused and demanded a removal of murder charges against them. The Sabha also objected filing charges under the SC/ST Act and demanded to remove the same. The Sabha wants police to file a case of a road accident saying that the police charged the two accused of murder without any initial investigation.

The Rajput Sabha staged a protest against the sitting Member of Legislative Assembly, Theog, Rakesh Singha alleging that he gave a casteist colour to the case in his address during the protest on the Shimla Ridge. In Shillai market, the Sabha also burned an effigy of the MLA. The number of people who participated in the protest against Singha and police was much higher than those who protested against the alleged murder.

The Sabha is demanding police action against the leader alleging him of inciting people of Shillai region.

The protestors including sitting and former panchayat pradhans also submitted a memorandum to the Superintendent of Police Rohit Malpani, with a warning of more aggressive protests if the Section 302 wasn’t removed from the FIR.

Both former and sitting MLAs of Shillai have maintained distance from the incident and are reluctant in commenting over the same. The local MLA had also not attended the funeral of Jindan.

The Sabha is also objecting to the deployment of heavy police force in Shillai saying it is a peace-loving region that does not require it.