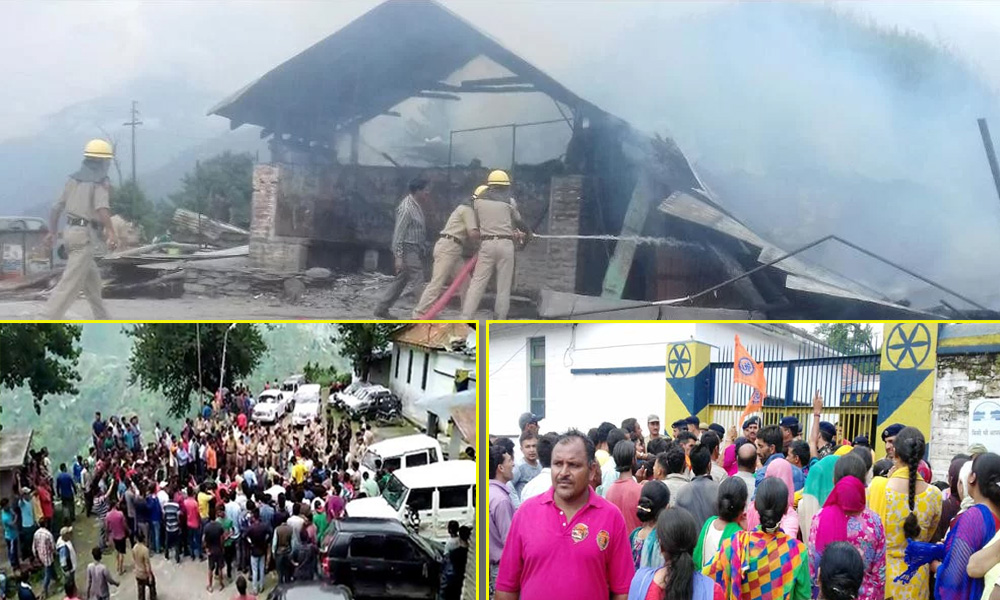 State unit of the Vishwa Hindu Parishad presented the case with a very different angle. The State President of VHP, Himachal, Aman Puri, in a media statement, claimed it a case of communal violence in which the teachers were assaulted by a specific group of people.

Shimla – After the riots in Kotkhai Tehsil of Shimla district over the rape and murder of a minor school girl, another case of alleged rape was reported on July 27 under Tissa Police Station in Churaah Subdivision of Chamba district. A teacher at a government school allegedly harassed a Class X student physically for over an year by threatening to fail her in the examination.

The teacher was immediately arrested after the victim’s father registered a FIR in the Tissa Police Station.The accused was booked under Section 4 of Protection of Children from Sexual Offences Act (POCSO). As per departmental rules, the teacher was automatically suspended after he remained in police custody for over 24 hours.

On July 29, locals had gathered at the Khushnagar Senior Secondary School in the presence of the Sub-Divisional Magistrate.

People alleged that other teachers had prior knowledge regarding physical harassment of the minor girl but they didn’t act to prevent it either. Enraged over this fact, as per reports, the mob roughed up these colleagues of the accused teacher. The people were demanding transfer of the entire staff from the school.

The accused alleged of assaulting teachers have been arrested, informed the Deputy Superintendent of Police, Salooni, Mahinder Sigh Minhas.

However, by Sunday, as reported by local sources and administration, the matter was given a communal angle by some politically biased groups. Sources said these groups protested against the assault on the teachers, gheraoed the Tisa Police Station, pelted stones, and then went on a rampage. Some of them of vandalized the market and set ablaze about half-a-dozen shops/stalls and a PWD rain-shelter. The Deputy Commissioner, Chamba, Sudesh Mokhta said that a mob gheraoed the office of Sub-Divisional Magistrate (SDM) at Tissa too.

On Monday, the State unit of the Vishwa Hindu Parishad came out openly in defense of the teachers and presented the case with a very different angle. The State President of VHP, Himachal, Aman Puri, in a media statement, claimed it a case of communal violence in which the teachers were assaulted by a specific group of people.

As per the sources including those in administration, the teacher was arrested and appropriate course of action is being followed. It was alleged that political interference was used to exploit emotionally charged mob.

The district administration has requested people to beware of communal rumors being spread in relations to the case with possible intentions of triggering riots.

It’s pertinent to mention that public in Himachal, especially in Shimla district is already in distress over an alleged botched-up police probe into barbaric crime in Kotkhai where a 16-year-old girl was allegedly raped and murdered between July 4 and 5. The public outrage had forced the State Government to order a probe by Central Bureau of Investigation (CBI) which is still in progress. The Kotkhai Police Station was set on fire by an angry mob after killing of a Nepalese accused by his co-accused.

As per the police complaint, the girl told her father that her teacher was blackmailing her since she was in Class X. As per reports, the girl had shifted to another school after passing Class X but the teacher continued to blackmail her.

At the same time, political critics are condemning efforts of some specific political groups to create chaos by giving the case a communal angle.

The Chief Minister Virbhadra Singh has ordered probe into the matter and asked the administration to take action against those who vandalized the public property.