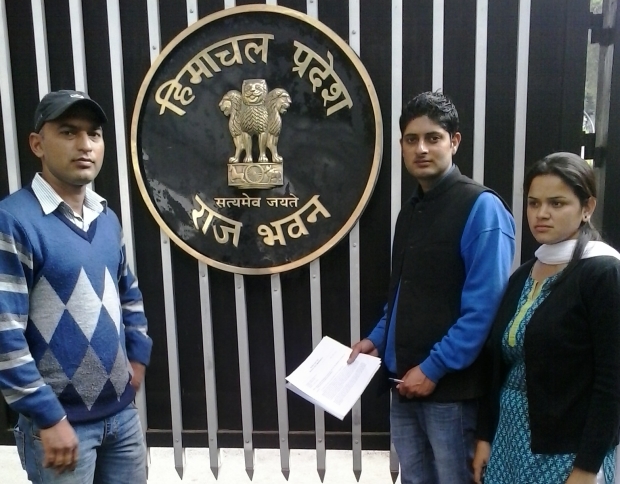 SHIMLA- HPU student community doesn’t seem to has liked the way the Vice Chancellor tried to ignored their representative body, Students Central Association. After two massive protest rallies, as another effort to restore the functioning of Student Central Association, HPU students on Monday knocked the door of the Governor Himachal Pradesh, Urmila Singh, requesting her interference in the unchecked corrupt, dictatorial and politically biased policies of the Vice Chancellor, ADN Bajpai. Although, the student body was dissolved, this undemocratic decision doesn’t seem to have cast any effect on its spirit to represent and help student community in Himachal. The SCA continues to extend help to new students, who are flooding the campus to apply and seek admission in the new academic session for various courses. The SCA is providing them guidance, information, and even facilitating the submission of their applications. Also, free coaching for entrance exams remain intact like always. Mr. Bajpai’s expectations to find relief from student resistance ended up in huge disappointments. The SCA has not given up yet. If we take a look at SCA history, then it’ll tell us that the young guns of Himachal rarely gave up against any authority while fighting for student grievance and demands.

The students alleged that the HP University is struggling to maintain educational standards, and after Prof. Bajpai was handed over the responsible position of VC, the varsity students are even missing even the basic facilities. Rather, the powers vested in the high position of Vice Chancellors were misused to extend personal favors to the Govt. and to a specific cult, RSS, which Bajapi himself follows and preach.

Well, as a matter of fact Mr. Bajpai forced his decision to use Hindi as a language of official communication through paperwork. He himself speaks in Hindi, displaying impressive respect to his mother-tongue. It’s worth appreciation that a person sitting at such a prestigious position has so much love for Hindi language. That’s his personal choice and love for the language. But, we believe, it’s not in accordance with the principle of democracy to force personal affection on the subordinates in a democratically designed higher educational institute of a democratic nation.

Further, students handed over a list mentioning 11 examples of Mr. Bajpai’s mismanagement, misuse of funds meant for students, his involvement in corrupt practices under the influence of a particular ideological cult, neglecting the interests of the students and disregards to the Student Central Association, a student body which is elected by varsity students through democratic polls every year. The list of complaints also said that varsity funds were spent on buying personal facilities instead of investing them in the development of the institute. It also said that under Bajpai as VC, HPU failed to provide sufficient faculty, resulting in the degradation of educational standards in contrast to the needs of the present time. His implementation of RUSA turned out to be a mess due to his incompetence to premeditate the outcomes.

Then, the students alleged unjustifiable fee hikes without adding any new facility to HPU resources. Rather, students were asked to pay more when the existing facilities and standards had degraded in past three years. Click On The Image To View The Related Story

When the student representatives protested against all these issues, the VC tried to suppress it by misusing his powers and through the police like registering fake cases, extravaganza of surprised police raids in the HPU hostels, rustication of students by projecting even minor scuffles as major violent activities. However, it only annoyed the students and their aggression gradually grew to a point that the suffocation was no more bearable. The students refused to be enslaved, to be terrorized, and they began to unite under SCA. As an odd decision, the VC dissolved the SCA in a hope to end the resistance, which was preventing him to enjoy the privileges of power vested in the chair of VC. But, his decision seems to have backfired as it enraged the student community even more.

What is most noteworthy here is that the VC is making continuous efforts to erase a democratic student body when the students themselves chose it through a fare, democratic voting? Why he did not seek opinion of those who had actually elected it, and to those whom SCA actually represents. SCA isn’t a political group; it’s the representation of the choice of students.

Same goes with the national political groups with their particular ideologies. That’s the way it is in India. The political power and the pleasures of the wealth are interlinked. Everyone wants to gain the power vested in a chair, enjoy the position of a ruler instead of servant. The politicians are so much addicted to it that any resistance or protest is a nightmare for them. Take our words, they will not hesitate to terrorize and shed blood if cornered by the public. HPU isn’t just an educational institute. It’s much more than that. The student protests should be taken seriously. The student communities do deserve a thought from the public as well. Whom do you expect to guide the State towards a better future; the existing political culture or the educated section of the society grooming at a higher educational institute?

HPU SCA had already submitted a chargesheet containing allegation against the Vice Chancellor to Vigilance Department along with CM, Virbhadra Singh. SCA said that it will submit a separate chargesheet with solid evidences to the Governor as well. As far as the matter of hope from the Governor is concerned, most of us know how free Governor of the State is to take any decision independent from the political influence.

HPU campus & nearby forests filled with garbage, Who is responsible?