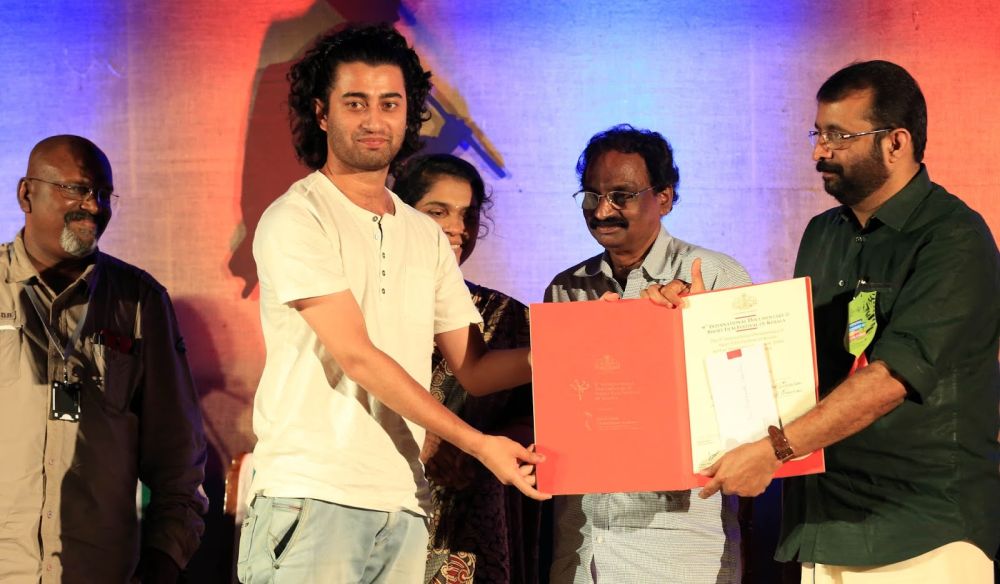 SHIMLA- Siddharth Chauhan, a filmmaker from Shimla, has done Himachal Pradesh proud by claiming the Best Short (Fiction) Film Award for his short-film at the prestigious International Documentary and Short Film Festival of Kerala, IDSFFK 2016.

It was the first Screening of the film and it had to compete with 30 other short films at the festival held from June 10 to June 14 in Trivandrum. The festival is organized by the Kalcharitra Academy of Kerala every year and features some of the finest films from all over the world.

Dev Kanya Thakur was another filmmaker from Himachal, who was recognized this year at the festival for her short-film “No Womans Land”

“PAPA” claimed the prize with an unanimous decision by the Jury Members, who found the film ‘unique & different’ from others and ‘innovative’ in its narrative and form.

PAPA is the story of a paralyzed mother, Sushma and her young son, Rajiv, who are learning to adjust with their new life. An accident leaves their lives scarred forever. Sushma’s only hope is a pigeon, which she found in her house the same day when her husband died.

The 28 minutes long short film is written, directed and produced by Siddharth Chauhan.  It was shot at at YWCA in Shimla in October in a span of six days, in a limited budget, with mostly a non professional crew in collaboration with Snow Leopard Productions and Yin & Yang Films under the banner of Secret Corridor Pictur, known for their independent films which have been doing rounds at the festivals since last 3 years, such as Boys Don’t Wear Nailpolish and Infinite Space.

Innovation in narrative gesture and wicked understanding of human behaviour,

The jury head was also all praise for the film, and added,

Beautiful depiction in a limited time and space, Poignant and Witty

Behind the scenes, the crew consisted of Yashwant Kumar Sharma as cameraman, Mridul Surbhi and Aastha Sen as assistant directors, and Tanmay Das as sound recorder. We hope to see more such works from Sidharth in future.

Speaker P. Sreeramakrishnan gave away the awards. In his inaugural address, he requested Culture Minister A.K. Balan to take steps to include international films in the competition category of the documentary and short film festival from next year.

Mr. Balan, who presided over the function, said that there was an urgent need for decentralisation in the release of films, as those in the smaller towns and villages also needed to have access to films. 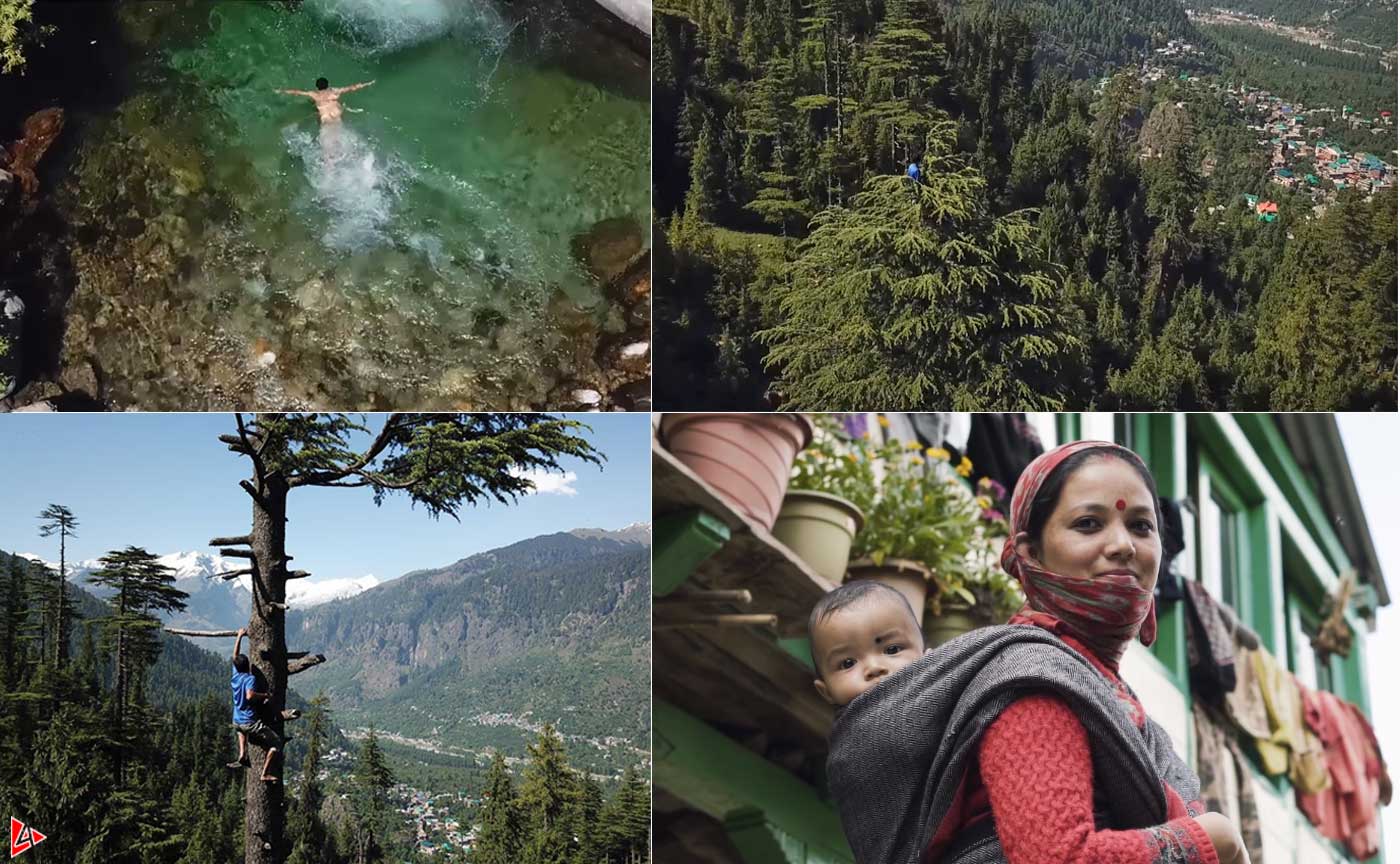 Kullu: A Manali-based startup, 4Play, has offered perhaps the most wonderful tribute to the mother- nature on this Mother’s day. In just four days, a team of youths at 4Play prepared a video, which includes some very well shot scenes and fresh glimpses of marvellous landscapes of Manali.

The video features Praveen Ghanghas (29), a nomadic mountain lover, who can be seen climbing up a high deodar tree and standing at the top of it like an eagle. No need to say, the view was breathtaking. 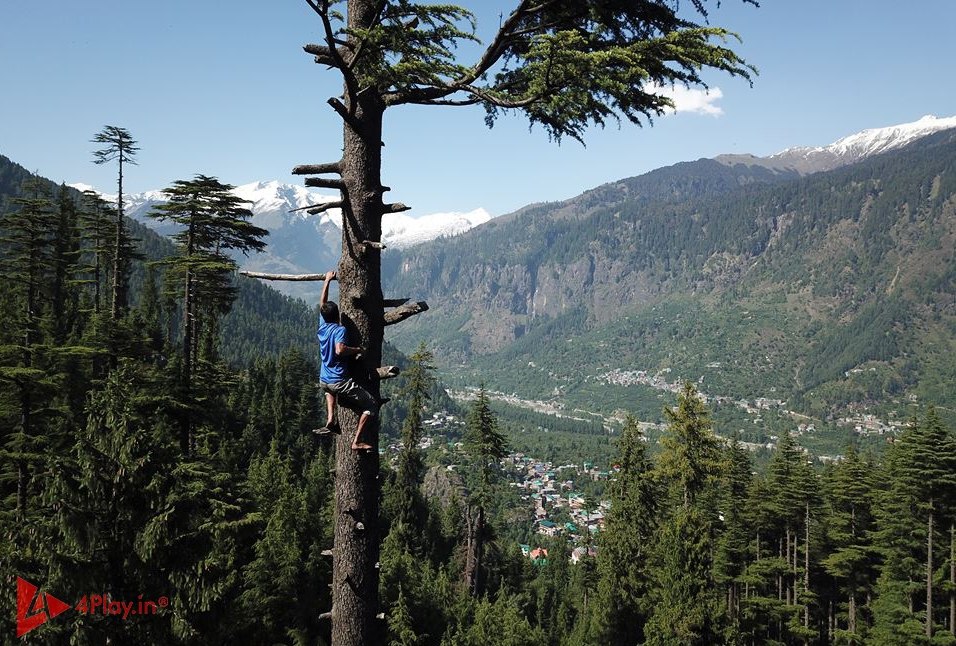 The 4Play shared some pictures of Praveen, who is definitely a fitness freak, with Himachal Watcher (HW).

He is a professional mountaineer with specialization in mountain search & rescue along with being a certified wilderness medical first aid responder. He is a part of the 4Play team and leads operations of all technical shoots at 4Play. 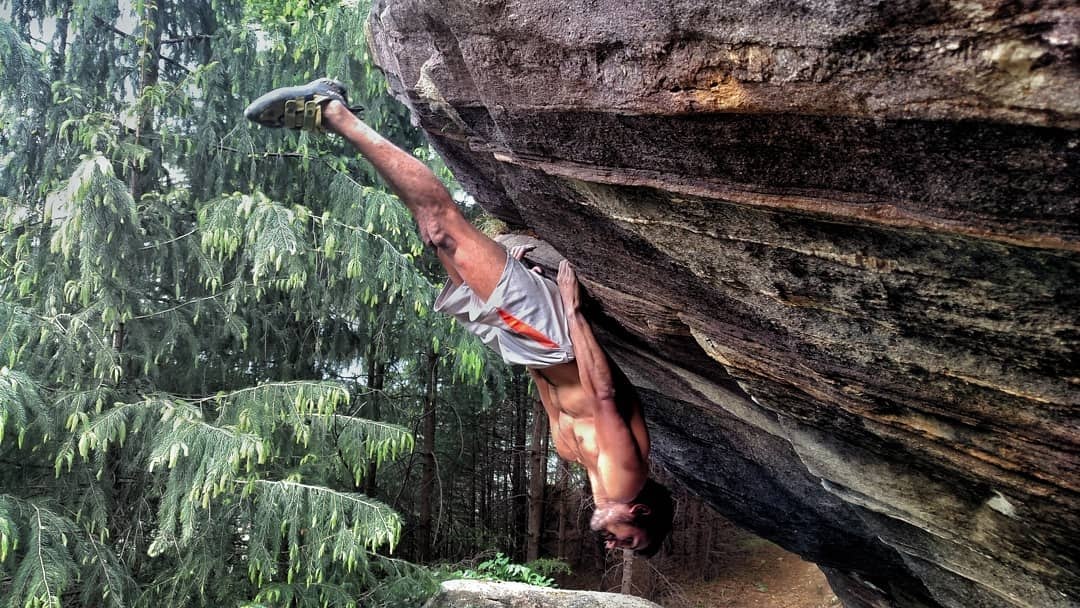 Nature has been depicted as a caring mother, who’s always willing to give without complaining. Similarly, Mother Nature does not a complaint about the wrath that the humankind has unleashed on it. So, we owe an apology to it for irreversible damage human developmental activities have done to nature. 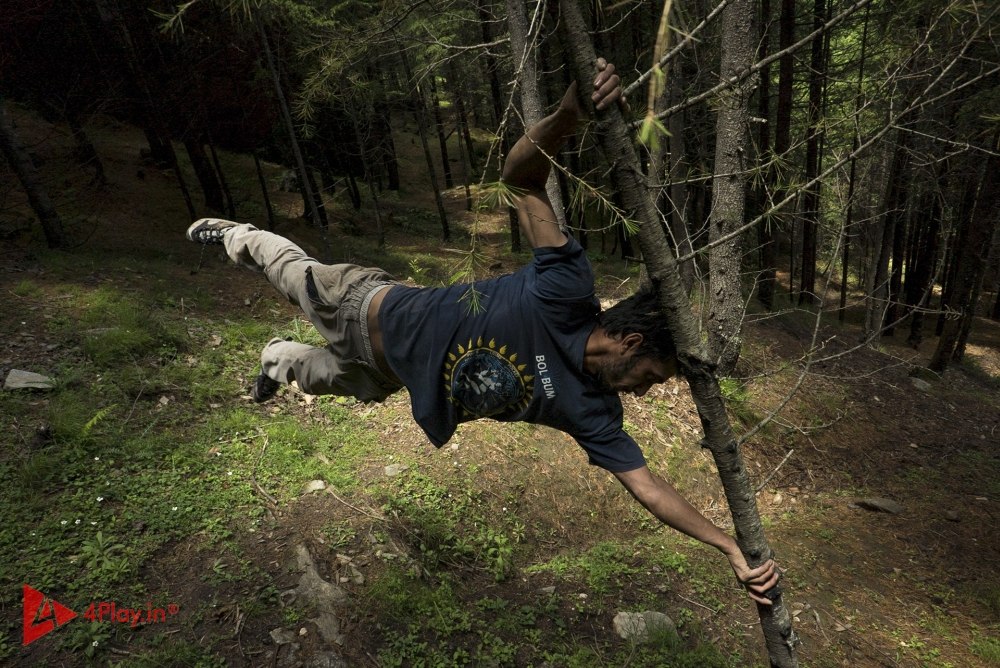 Ironically, the Manali, like rest of the tourist towns, is overburdened with ever increasing tourist flow, and the resources of the place are falling victim to over-exploitation. The ecology is heading towards its doom while the government and the people are thinking only about exploiting the beauty of Manali for money.

We have been lately trying to bring forth the subject how the weight on the mountains is increasing and how the growing tourism is only making it worse. We have lately done stories on the same line. So on the occasion of Mother’s Day, we wanted to send out this video as an acknowledgement to all mothers (even mother nature) who never complain and continue to take care of us despite everything

Is not it an excellent way to tell people to spend more time with nature and care-back for it? 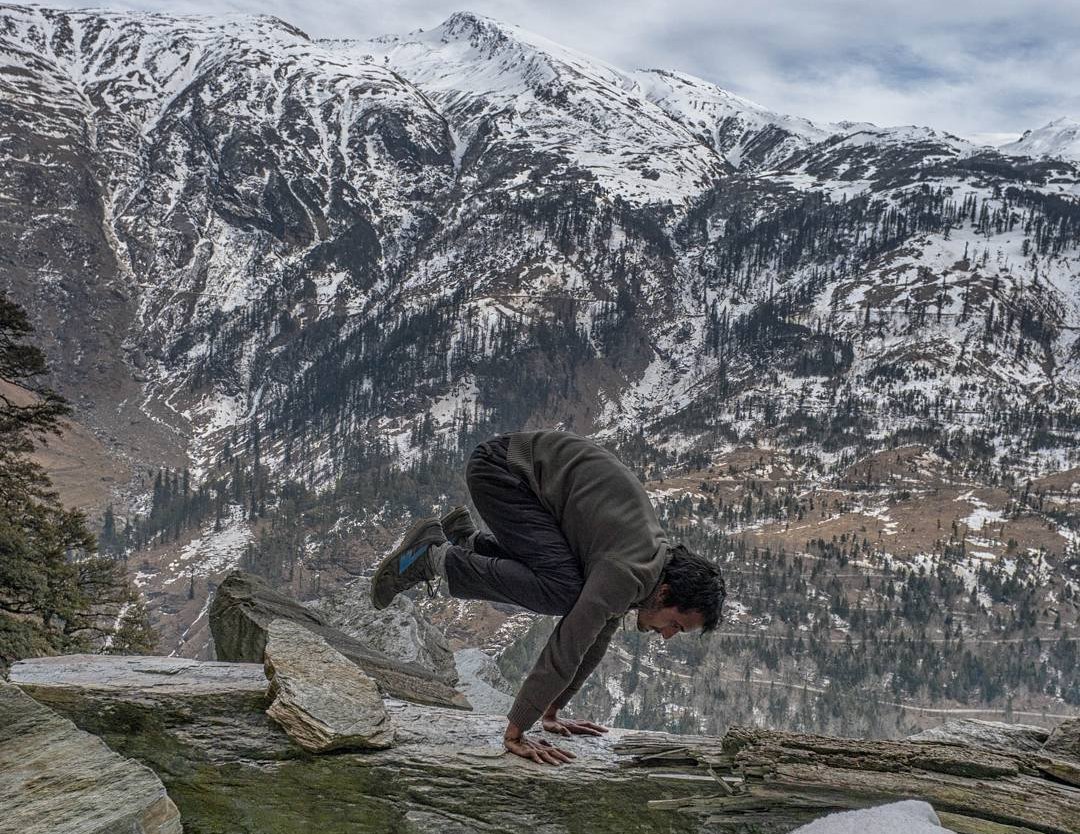 The video came from the same team that was behind ‘Bawali Booch’ – a short musical and adventurous tour of Manali town. It’s worth your time.

4Play is a start-up that is catering exclusively to the Extreme, Adventure and Action sports communities in India. Curating stories from the Indian outdoors, the group is currently weaving Eastern Hemisphere’s first content network for extreme and action sports. The team is looking forward to getting into the international arena so that athletes could gain mainstream attention.

Initially, the three founders of the start-up set, Anuj, Kshitij and Sukrit, set up their own shop in a rented apartment in a shady alley of New Delhi. However, they soon realised that metropolis was way unaffordable compared to their meagre investment. That is when they made the decision to move the operations to a quaint place, away from the much-crowded Tier 1 & 2 cities.

Very recently, the start-up launched an incubation program at Indian Institute of Technology IIIT), Mandi – Catalyst. The founders say that being one of the few startups in the region, 4Play enrolled for the program to lay the foundation of a community to spearhead enterprise in the region. 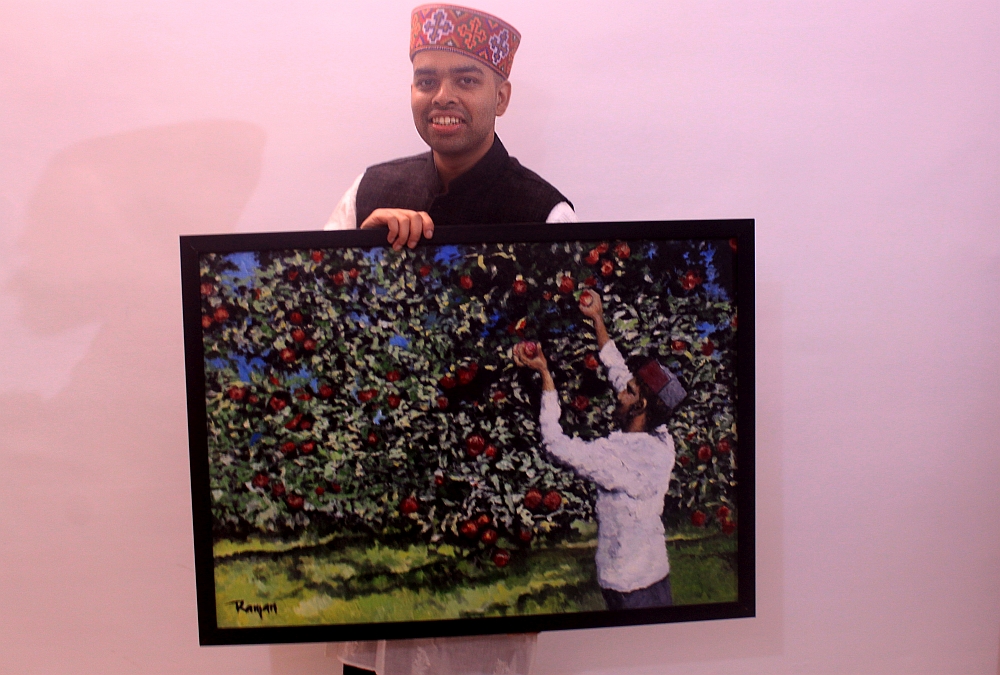 Shimla: For the art lovers and critics in Himachal Pradesh, a self-taught local artist will showcase his collection of oil paintings titled “17 Paintings” on a two-days exhibition at the historic Gaiety Theater, Shimla on December 9 and 10 from 11.00 AM to 6.00 PM.

Surya Ranjan Shandil (31), who hails from Solan district, works in Bengaluru as a computer programmer in the field of education technology. After his schooling from Shimla, he obtained a B.Tech Degree from Indian Institute of Technology, Kanpur. 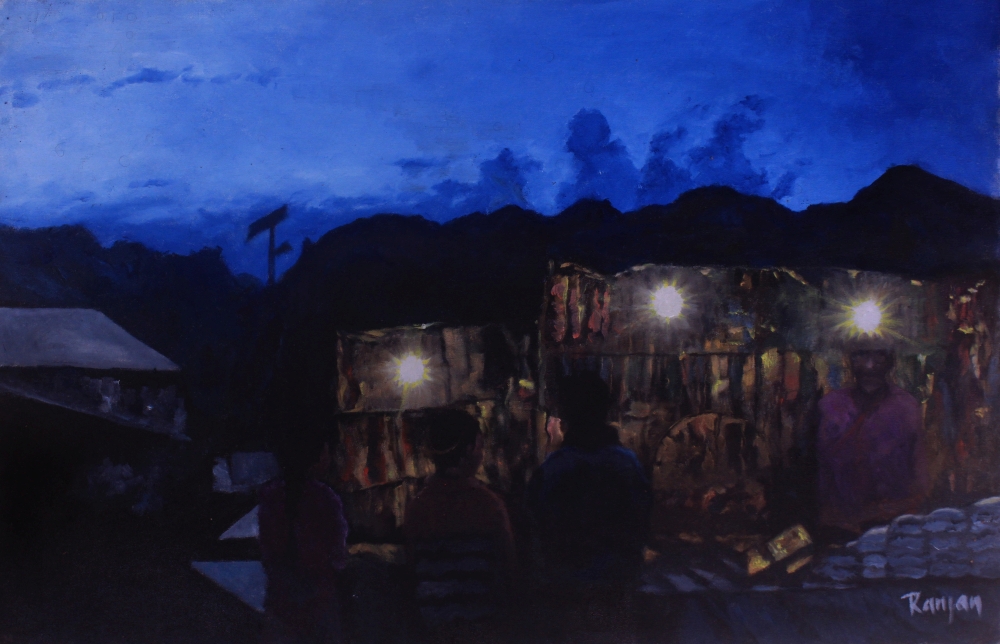 However, he did not ignore his love for the painting and continued it at evenings after college, work, on weekends, and Sundays.

Later, Ranjan realized he has a collection of his own. His first solo exhibition was held in November 2016 at the Gaiety Theater.

The appreciation he received at the first exhibition encouraged him to present his second collection of oil paintings that he painted during 2017.

He is best known for his captivating genre paintings.

I started drawing at the age of 3-4 years. At that time, I used to sign the drawings with incorrect spellings of my name,

His father, Dr R G Shandil, who is now retired, was a professor of mathematics at the H.P. University, Shimla. His mother Dr. Sandhya Shandil was a teacher at the St. Edward’s School, Shimla.

After graduating in 2010, I started with oil painting during the evenings and weekends. Gradually I built up a collection and in November 2016, I held my first solo exhibition of 29 oil paintings at gaiety, 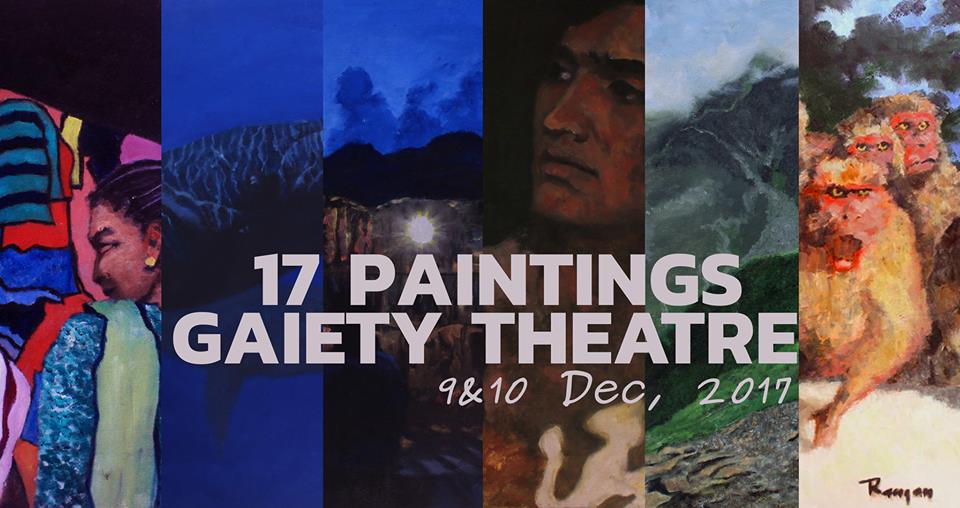 Ranjan’s paintings reflect people. The upcoming exhibition opens with simple themes like the joy of shopping, local festivities, celebration, dance and music. Most works painted on these themes are in the context of Himachal. 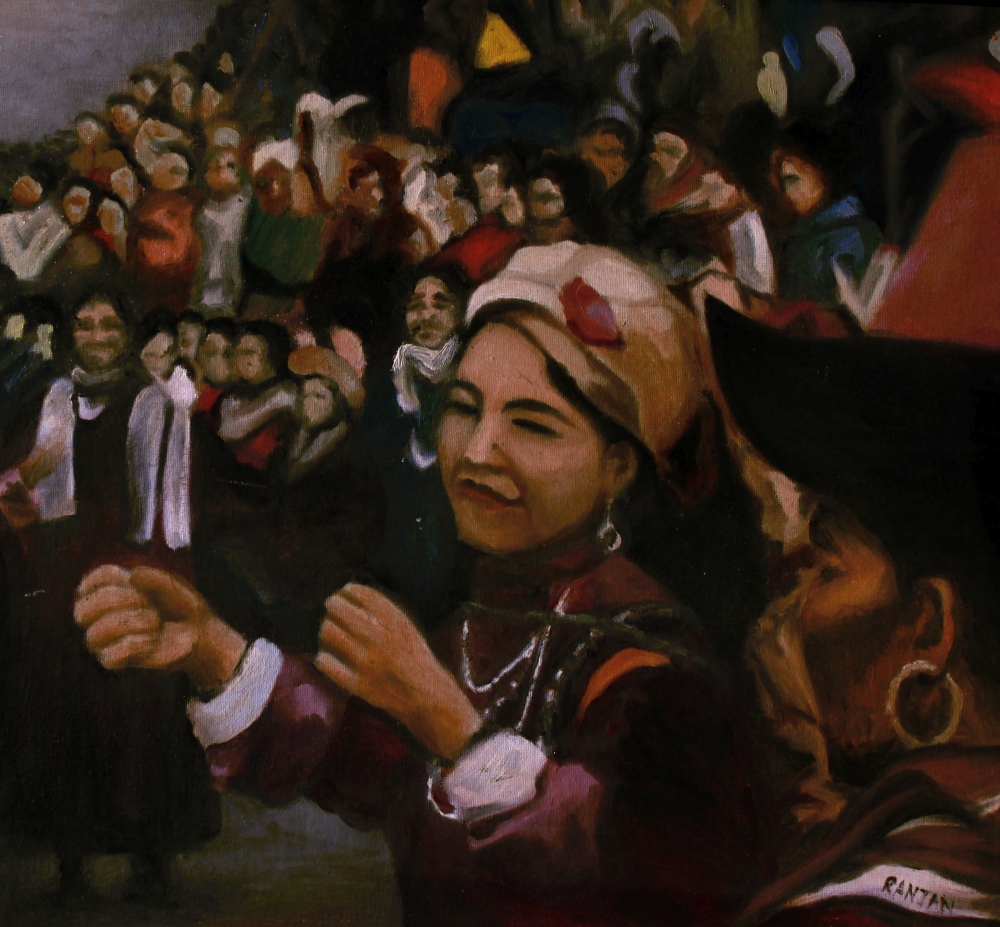 Slowly moving towards expressionism ‘Kayal’ takes the viewer to the realm of subjectless painting while in ‘Frenzy’ the artist dispenses with form.

Ending on a light hearted note, the paintings ‘Bonfire’ and ‘A Silent Conversation’ recreate the magic of Gabbar Singh and Rajesh Khanna on canvas.

About his love for painting, he said,

I believe art is a journey of constant improvisation.

It would be his second solo exhibition. Earlier, he has participated and won prizes in several painting competitions throughout his schooling and B.Tech. 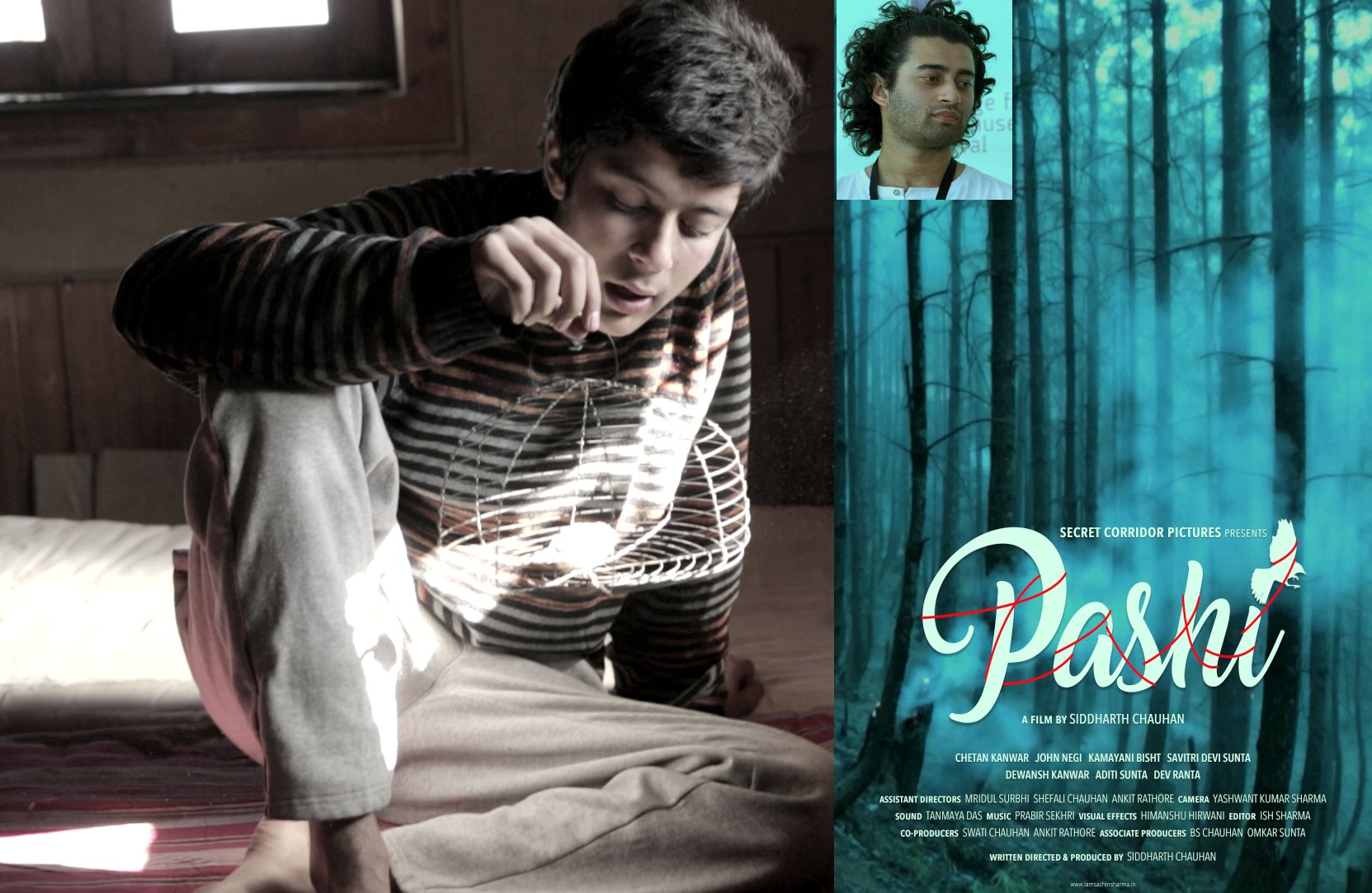 Shimla – A short-film Pashi, from the budding short-film maker from Shimla, Sidharth Chauhan, has made into the prestigious Rhode Island International Film Festival to be held in the United States in August 2017. The festival is held every year since 1997.

The film is produced under the Secret Corridor Picture and it will be film’s first international premiere.

RIIFF is an official Oscar qualifying event. This year, PASHI is the only film selected from India. If Pashi manages to grab an award here, it will be directly nominated for the prestigious Academy Awards or the Oscars Awards.

Sidharth has been in news since 2014 and some of his other short-films like “PAPA” and “Boys Don’t Wear Nail Polish” have gathered awards and appreciation on the national and international level.

PASHI means a trap in the regional Pahari dialect of Rohru (Nawar valley), especially around the villages like Tikkar, Pujarli, Dhanoti, and Khalawan. It is a very old traditional concept used by villagers and children to hunt birds and animals.

The film is inspired from Siddharth’s childhood memories in his native village Dhanoti (in Rohru).

Pashi, written, directed and produced by Siddharth, is a story of a young boy (Chetan), who learns about this technique of trapping birds from his old grandmother (Savitri Ji). He begins to practice it. His friend John encourages him to go for it while his mother is worried about his future.

The film was primarily shot in Sunta Lodge, a beautiful wooden mansion of Village Khalwan. Some of the parts were also filmed in Village Dhanoti neat Tikker.

The production team is excited on receiving the news. “As an independent film production house based in Shimla, this is a dream come true and an unparalleled honor for all of us,” said the team.

Lead actors include Chetan Kanwar, a Class XII student at the Chapslee School, Shimla, John Negi, a model/actor from Rampur, Kamayani Bisht, an English Professor at the Government College Theog, Savitri Devi Sunta, the oldest family member of the Sunta family in Khawalan.

Other crew members are as followed.