If you remember, a few days ago, HW had published an article on the extra convenience charges being imposed on consumers paying their online electricity bill through HPSEB’s website. HW had also submitted a complaint regarding the same. A senior Journalist, Ravinder Makhaik, picked up the issue after which it appeared in Times of India twice. Finally, now the government has asked the HPSEB to review their decision to impose the extra charges on the consumers and negotiate with the banks and credit card companies in order to adjust the charges.

According to Mr. Ravinder Makhaik, the Principal secretary power SKBS Negi said that the electricity board has been asked to reconsider its decision to impose 1% extra charges for those who use the online bill payment gateway and the board has also been asked to negotiate with banks and credit card companies regarding the imposition of these charges.

SHIMLA- Yesterday, Himachal Watcher had posted a story with a video showing locals in Lakkar Bazaar locality of Shimla city getting angry over poor quality maintenance work of pedestrian path. People had surrounded the contractor, who had to flee from the spot to escape people’s anger. The video was forwarded to various officials from Deputy Commissioner, Rohan Chand Thakur, Deputy Mayor, Tikendar Panwar, and Mayor, Sanjay Chauhan.

Only the Mayor took notice of it responded.

The stairs have been dismantled and an inquiry against the contractor has been initiated regarding poor quality of work and the maintenance work will taken up again,

Reportedly, the ongoing maintenance work of various pedestrian paths, which mostly consist of stairs, has faced criticism from people. Public has reported that the work is being executed in a very unprofessional manner with poor quality material.

In a similar case in Summerhill Ward, an official, who was on his way to the spot, claimed that the contractor has not even begin the maintenance work at the said pedestrian path. He said the old tiles are being dismantled. However, the video shows that work has already begin. The workers can be seen preparing material.

The case has sent a wave of shock for the SMC that is already struggling to save its reputation. Aware citizens have now started taking small initiative like challenging the poor quality work by private contractors. It’s definitely a small step toward taking the responsibility to eradicate corruption and expose the corrupt for the good of entire society. No need to say, it will ensure that public money doesn’t go into private pockets of contractors and corrupt officials. 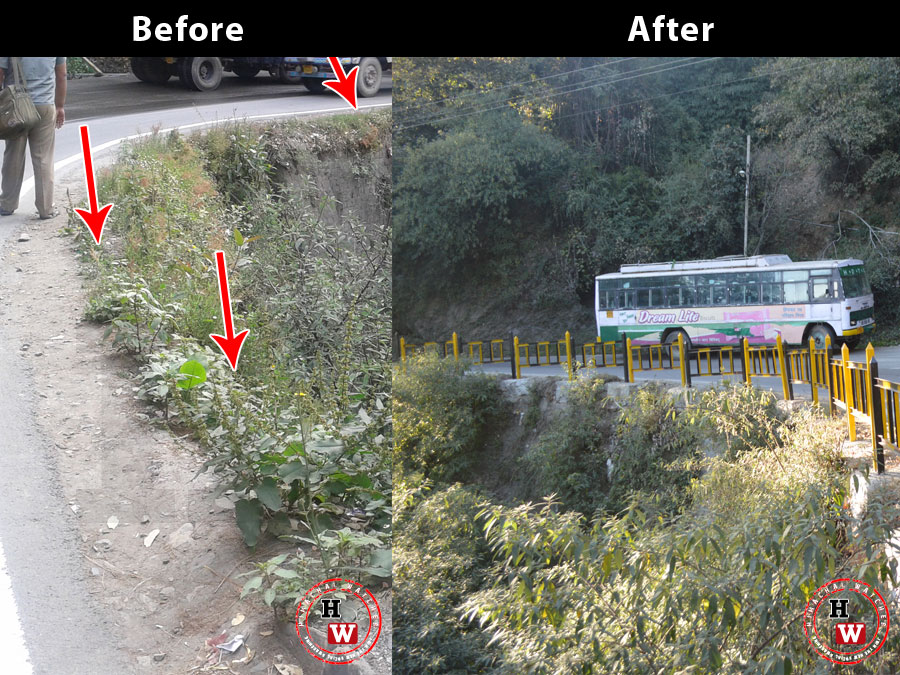 SHIMLA– Right from the beginning, HW regularly approached the Govt. with complaints highlighting a need of better roadside safety measures like proper parapets and safety of railings, at least, on identified lethal spots throughout Shimla. Many readers sent us pictures from various parts of Shimla, confirming the prevalence of carelessness on the part of the Govt.

In the year 2014 itself, 557 persons have been killed and 2612 injured in 1422 accidents reported upto June 30. In its September 18 order, Himachal Pradesh High Court had directed the state government to create a Motor Accidents Claims monitoring cell in each district headed by the DSPs to monitor the compliance of the mandatory provisions of Motor Vehicle Act. However, it seems nothing has changed as the number of accident and causalities in these accident continued to grow rapidly even after June. Now, years after complaints, a couple of these spots on bypass have received relief in the form of some safety railings, but most of them remain unsafe.

Obviously, the Govt., PWD, and Shimla MC did not let their reputation down, and responded to public complaints in documents only except a couple of spots where safety railings were installed like the one where IPS Chandrashakher died in a car (Nano) accident after it rolled down due the absence of any sort of safety measures. You can read about IPS Chandrashaker Car Accident Here.

Human lives, especially those of common creatures, for our Govt. do have a place, but always at the bottom of the list. In couple of past year, the number of road accident has seen a rise in Himachal. Not all of these accidents could be justified by blaming the drivers. Govt. shares a lot of responsibility here. Making roads safe in in a hilly terrain like ours require a lot more efforts than what’s being done.

We would request are readers and members to help us highlight such dangerous spots on Himachal roads which are unsafe and unprotected. Your effort could help save some of the lives, if not all. All you need to do is to click the photographs of the spot and mail them at editor [at]himachalwatcher[dot]com or post them directly in HW UrNews Section for instant posting. 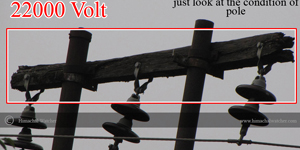 On Jul 13, 2012, Himachal Watcher submitted a complaint sent by one of our readers residing in Summerhill ward number 5 to HPSEB and MC Shimla. The sensitive issue of a risky 22,000 Volt electricity pole was one of the few other issues.

We are glad that the HPSEB responded to the complaint and ER. Ravinder Kumar Sharma, Chief Engineer, Chief Engineer (Operation) South, (HPSEB) Direction/Order, assured that the SE(Op)Circle, Shimla/Sr.XEN,City will look into the matter personally and submit report over the action taken within 3 days.

Where HPSEB responded to the complaint immediately and assured action, MC Shimla said ‘ in progress’ as usual like to most of the complaints it respond and they always remain in progress.

Take a look at MC’s “In Progress”

1. Dear Chief Minister, Electricity board is killing trees in front of your eyes

2. Since 10 years in tatters: MC Shimla says it has no funds

3. Cruelty against trees knows no bounds in Shimla City

5. Wretched condition of the road leading to the temple of education, HPU Summerhill.

7. Negligence of electricity board (Boileaugang to Shiv mandir)

8. Patients suffering because of no ambulance road

9. Save Trees: 24 private luxury apartments on the grave of hundreds of trees

HW is now waiting for the actual action that the complainer asked for and will keep you updated regarding progress in the matter. Further, if anyone have similar complaint regarding any sensitive issue that ask for attention, please feel free to write to us.